Red is a common color for doors in liturgical Christian churches. It is a symbol of the Holy Spirit, the fire and spark of God that animates all things. Interestingly, red is also the color that Tibetan Buddhists use to mark its buildings that have a statue of Buddha in it, as well as the color of the robes for their monks – for the very same reason. Red is a symbol of the Divine presence within. Red is also the color of Torii gates in the Shinto faith tradition. They are used to mark spiritual gateways, to indicate that beyond them is a holy place. It can also be described as being a visible symbol of the Presence of God, or as Jews would say, the Shekinah.

These were taken late September 2015 in St. Meinrad, Indiana, at the Archabbey and the seminary. 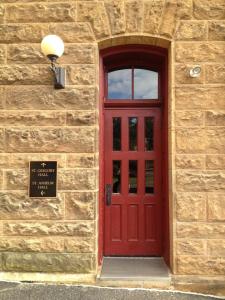 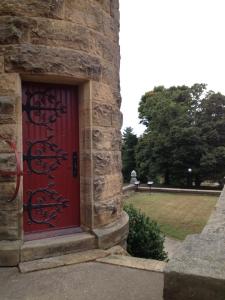 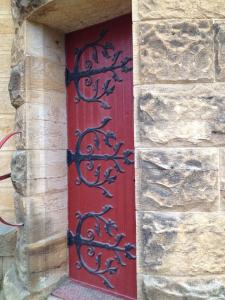 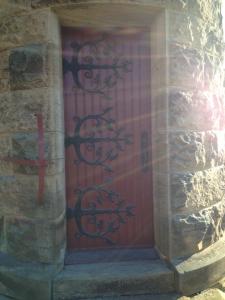 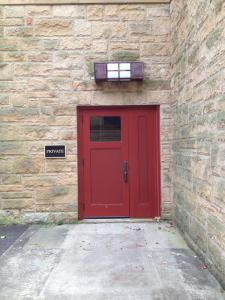 The front of the Archabbey with the three sets of red doors. 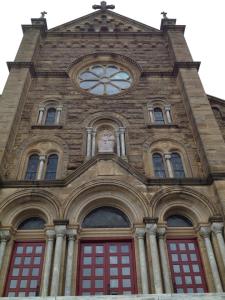 A closeup of the Yale lock on one of those doors, with the red paint better visible. 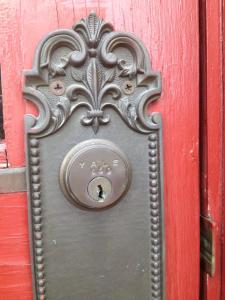 I had a friend who I decided was God blind. Like color blind but for God. He couldn’t see any reason to believe in God. This blew my mind. I’ve always known of God.

The time when I was a baby in the crib, and I knew. I just knew.
The rescuing by an angel when I was flying too high on the swings.
The answers to questions. The feeling of being held, of being safe.

It is like being a fish and not believing in water.

Some people are color blind.
My dad couldn’t see purple. We were in the car together and he saw another car. He asked what color it was. That made no sense to me. How could you not see this? It is such a simple question. But he had an inability to see reds and greens. I’d forgotten, and to be honest I’d never really understood. How can I understand something so basic as an inability to see color?

Perhaps it is the same with God.

We have Buddhist neighbors. The mom was sick with kidney disease and it was really worrying the son. He cried while he told me how concerned he was for her. I know a little about Buddhism but couldn’t remember if praying was part of it. I asked him if he could pray for his Mom. No, he said. So I did. God took mercy on her and she is better. It has been three years now. She’s on dialysis, but alive and happy and still working in her garden. Her spirits are better.

I don’t pray with the idea that God is my waiter. God doesn’t give me everything I ask for. I ask and I receive whatever comes, or doesn’t come. I pray because I know there is someone on the other end of the line who is listening and who cares. This is the most important part.

Sometimes I think of God as standing at the top of a pit I’ve fallen in. He isn’t in sight, but if I call to him, he can point out a handhold that I can’t see from my angle. Sometimes I pray to remind God of how small we are – that the big storm we are in is bigger to us, and we are so small.

This applies to thunderstorms and tornadoes as well as life in general.

God listens. That is why I believe in God. Not as an abstract thing, but as a real, living entity, a force, a power, that is active and present.

I went to Louisville, KY on May 19th to hear the 14th Dalai Lama speak on “Engaging Compassion”, along with about 14,000 other people. These are my notes from that public talk. My comments are in parenthesis.

This is the century of dialogue. More and more people from all over the world and all religions are talking with each other.

America is the leader of the free world, so it is possible to lead the world in compassion.

It would be good if America could import its democracy style to China.

He is Buddhist, and he prays every day, but he accepts the limitation of prayer. Real effect comes through action.

To make the entire world better, start with yourself. Your actions make a difference.

If you have respect for other’s well-being, then there is no room for violence.

Peace starts within you, now. It creates a ripple effect.

Attachment leads to bias and a loss of objectivity.

It is possible to have faith in your tradition, and still have respect for all traditions.

On war – If one person kills another person, he is a murderer and goes to jail. If a soldier kills a thousand people, he is a hero. (Killing is killing, no matter who does it.)

The biggest moral and social problem is the gap between the rich and the poor. It is similar to the caste system in India.

There is a oneness within all human beings. We all have the right to be happy.

It is possible to oppose another person’s attitude but still love them.

Instead of anger, have pity. (It is more compassionate to feel sorrow at another person’s bad choice of behavior than to be angry.)

Have a genuine concern for other’s well-being.

Separate action from actor. Oppose the action, forgive the person. People are not what they do.

We must respect all of God’s creation. So environmentalism should be part of your faith.

There are over one billion non-believers, so we must find different ways to help them to understand how to have a “happy life and a happy body.”

Thomas Merton was a bridge between Buddhist and Christian monks. If you follow your own tradition, you will discover that we are all following the same practice.

Politically, His Holiness the Dalai Lama is Marxist. He believes that in capitalism, if profit is the goal, then humans suffer. Humans are more important than profit.

(Edit) – I’m adding some pictures to this, since I’ve figured out how.

On the way to the event – 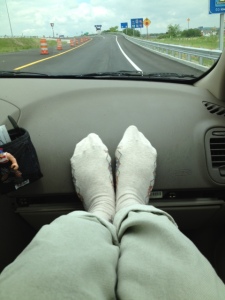 Waiting outside to get in. We got there about an hour early. There was a long line past us. 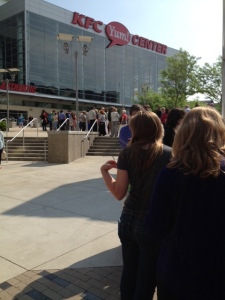 Seen outside the auditorium. 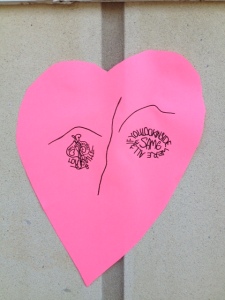 Our seats were really really high up. The rest of the crowd has not arrived yet. We had time to get and eat our lunch there. 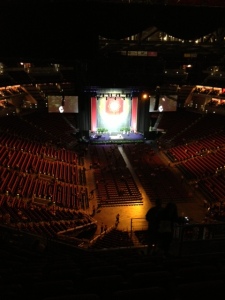 The Dalai Lama has arrived. The tiny red dot in the center is him. 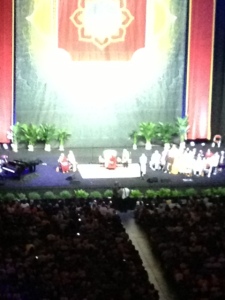 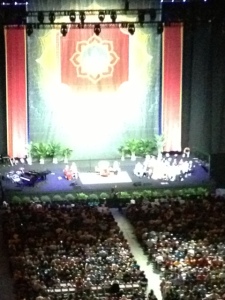 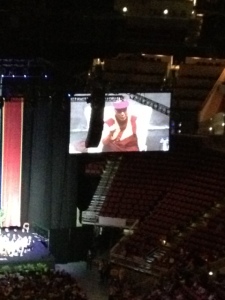 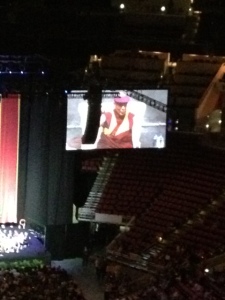 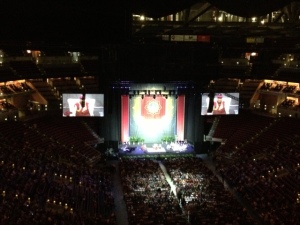