Twins. Talking dolls. Aliens. Mis-matched couples. What’s not to love about short stories that are a little bit strange? You get to wander into an unusual world for just a little bit – but not too long. You don’t want to get stuck there, do you? You might never come back… Every story in this collection was inspired by an unusual black and white photograph the author found. These stories were written between October 2015 and July 2017.

He waited for her by the fountain for over an hour. She said she’d be there. After the first 15 minutes (the standard in college to wait for the professor) he checked his watch again. Maybe it was fast? So he asked a bystander, a mother watching her children frolic in the little geysers that were part of the park. She switched from texting to the homepage on her phone and showed him the time. 2:15. His watch was right.

Then he wondered if he was in the right park. “Excuse me ma’am. I’m sorry to bother you again, but is this the only Coolidge Park?” She assured him that yes, it was, and gave him a funny look which he ignored. He didn’t feel like explaining that he’d once waited for someone at Nashville’s Centennial Park, having not correctly heard Bicentennial. They were less than 3 miles apart, but because he was on foot it might as well have been 100 miles. It would take him an hour to walk there, and then he would have been truly late.

He had plenty of time to ponder this while he waited, but an hour was the most he was willing to sit around. Was she making fun of him? Did she not want to meet and sent him on a a snipe hunt? Maybe it wasn’t like that. Maybe she forgot. Or worse, he thought with a shiver, maybe she’d been in an accident. He would have called her if he could find a payphone. Of course he had a couple of quarters with him. His Mama had taught him that. Too bad her good advice would only have worked well in the era she grew up in. Then it was easy to find a payphone. Now, because everyone (everyone except her son, he mused grumpily) had a cell phone there was no need for payphones everywhere. And how was he supposed to find one? With a smartphone you could turn on ‘maps’ and ‘location services’ and type “payphone” and you’d have a handful of little red dots all over the digital map in your hand telling you which way to head towards. But (he thought ironically) if you had a smartphone you wouldn’t need to know where a payphone was.

Maybe he’d have to bother that distracted mother again and ask to borrow her phone and give his (maybe) girlfriend a call. Or maybe he would just walk home and call it a night. He didn’t want to appear desperate. But he was.

So many translations say “Selah” is an unknown Hebrew word, possibly giving a musical notation, as it is most often used in Psalms. This makes sense, as they were meant to be sung.

However, Hebrew is pretty simple if you know that the letters are essentially pictograms – and the “images” spell out a simple sentence. Each word has its meaning within the letters themselves.

“Lamed” means cattle goad, staff. Symbolically it means prod, go toward, toungue. It is the prodding stick used to move an ox. Sometimes we are like that ox and need a strong stick to get us going in the right direction.

“Hey” is a window or fence. It refers to revelation, to perceive. It is also the definite article “The”. It reminds us of THE God – not a god. It is sometimes used as a shorthand for referring to the Name of God. “Hey” is a way of focusing your attention – of keeping out what will distract you, lead you astray. Praise God the God the one, in silence and all. Turn from your own understanding. Awaken and turn towards life.

You praise God by taking this time to think about what you just heard. Inwardly digest it. Let it reorient you.

Be silent, and listen in your heart to the Words you just heard.

Stop – and praise God by meditating upon his Word.

Be still and know that I AM God.

It is like how Jesus would say “He who has ears to hear should hear.”

Essentially it means to give praise to God by being silent and contemplating what you have just heard in the Word. Your praise is not one of noise, but a contemplative silence.

I’d heard about this interactive art exhibit for years.  They pop up and are there for a brief time.

And then I came across one in Chattanooga, tucked away in a corner.  I almost missed it.  It was dark, I was tired.  I told my husband that we should come back tomorrow in the daylight.  He talked me into turning the car around and going to see this right then.

It isn’t exactly on the main path.  Here is the view of the area from Google street view from above.  The wall is approximately in the middle. It is to the left of the bridge.  This is near Coolidge Park, but not part of it.  It is at the blue square, which is a roof for some machinery. 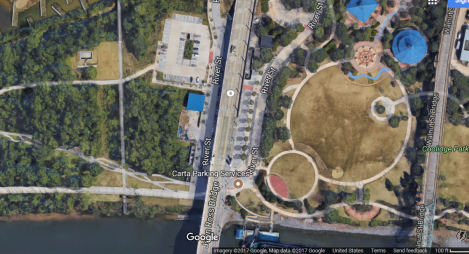 Here is a view from street images from February 2017, showing the wall in the daylight before the exhibit.  This is a short walk from Sushi Nabe – a very good Japanese restaurant in Chattanooga that is also off the beaten path and worth finding.

This exhibit was unveiled July 21st, 2017, and is sponsored by Hospice of Chattanooga.  Tracy Wood, CEO of Hospice, said that the goal was to create an opportunity for Chattanoogans to think about life and live every day as if it were their last.

According to the Before I Die website “Over 2,000 walls have been created in over 70 countries and over 35 languages…..The original wall was created on an abandoned house in New Orleans by artist Candy Chang after the death of someone she loved.

Here is the banner attached to the exhibit to explain it.

Here are some of the photos I took of it. 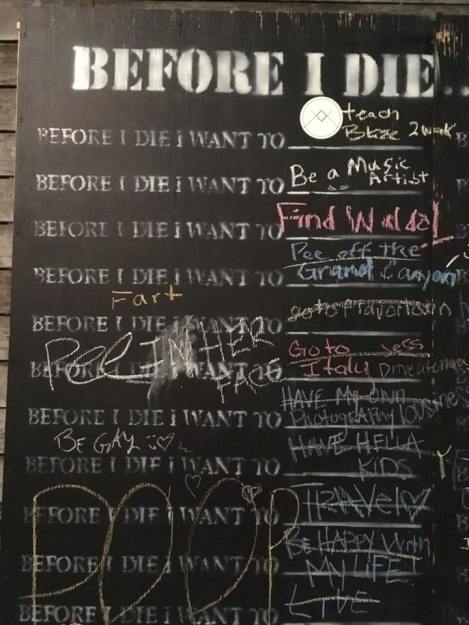 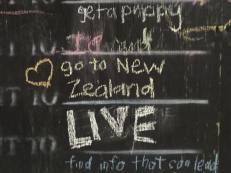 A few defined that as “Sky dive”

Several wanted to travel – namely to France, or Japan, or New Zealand.

Several wanted to marry  – some naming the person.  I wonder if they proposed at the wall?

And the last one that I saw was poignant – 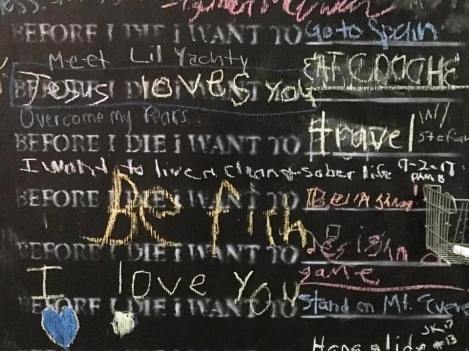 Saying simply “I want to live a clean a sober life” – and dated that day.  I paused, remembering my own struggle to get clean and sober.  I prayed for this anonymous stranger to have strength.  Sobriety is hard but it makes life much more meaningful.  A life spent messed up isn’t really experienced at all.

What would you write on the wall?