There was an impressive celebration at the Hermitage on March 15th, 2018.  It was the 251st birthday celebration for General and President Andrew Jackson. I had taken some vacation time to attend, and it was a perfect day.  Conditions were 66 degrees, sunny, with some wind.

I took time to tour the inside of the mansion while the “First Ladies at the Mansion” presentation put on by members of the American Historical Theatre was going on outside.  By going then, I was able to be in a quiet space, before the schoolchildren went inside.

The mansion is currently undergoing efforts to put in a new fire suppression system, so the rooms don’t have everything in them that they normally do.

I have previously asked several different employees about sketching inside the mansion, since photography is strictly forbidden. Nobody has said that I couldn’t.  I didn’t have an opportunity to ask again since the docent was busy, so I began sketching in the small lobby that connects the overseer’s office and the study.  I also sketched upstairs during the lecture, and took notes since the history of the place and family is fascinating.  The docent noticed me and asked what I was doing.  I showed her the sketch. She was pleased and continued with her speech.

I sketched this with a pen instead of my usual watercolor pencils to be less obtrusive.

Then I was fortunate to catch the end of the “First Ladies” presentation, and began to sketch there. 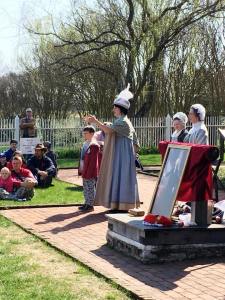 The initial sketch of the “First Ladies” – (this one is Abigail Adams) and the wreath-laying ceremony are on the same page. This is before I have added more color and water. 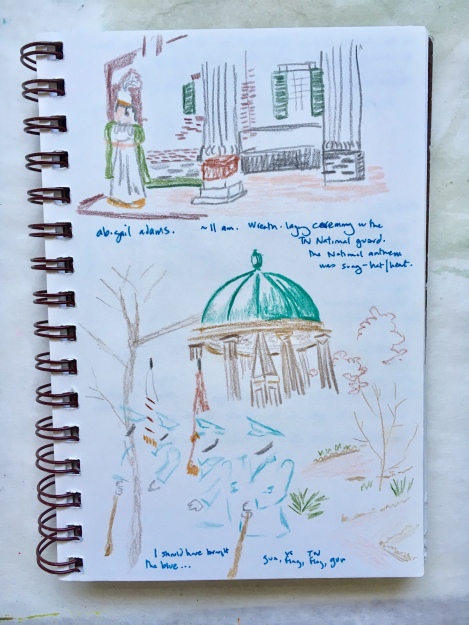 I thought I was late to the wreath-laying ceremony, but I ended up being in a perfect place to sketch.  The audience was on the other side of the fence, in the cow pasture.  (There is a herd of Banded – or Belted- Galloways here, by the way.)  I was able to stand in front of the fence, at the corner, out of the way but with a fantastic view of the National Guardsmen. It was at this point that I regretted not bringing the navy blue I’d spotted last night. I can only carry 12 colors, so I will always have to adapt. Too many colors can be too much to juggle on site. 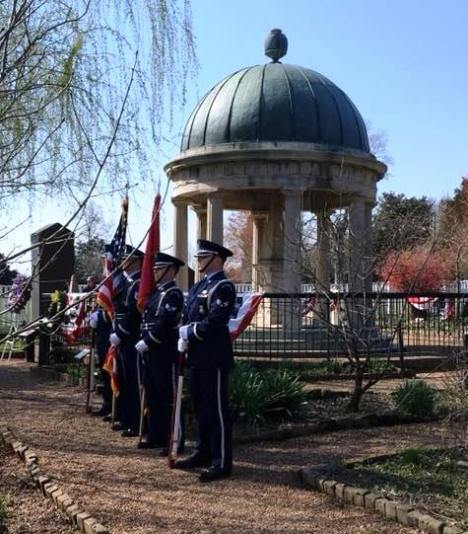 I also went around the fence, and sitting down on the grass, got to sketch the speakers.  The person speaking is Justice Cornelia Clark of the Tennessee Supreme Court. 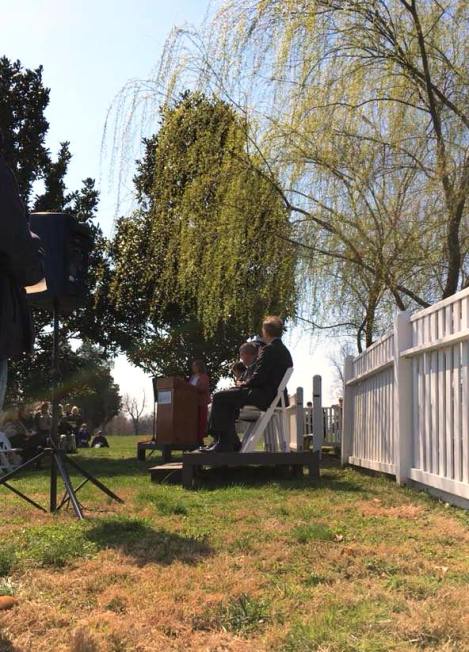 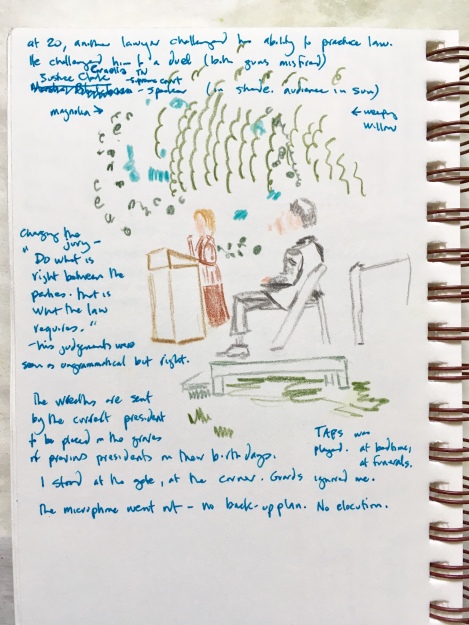 The National Anthem was played, and I sang along.  About a third of the way through I remembered to put my hand over my heart and take my hat off.  I think it would be lovely to have more opportunities to sing the National Anthem so these important parts of it aren’t forgotten.

After the ceremony, a person in the National Guard gestured for me to come over – asking with gestures if I was sketching.  I briefly thought he was signing, so I started to reply in ASL, since I have just spent 8 weeks learning some of it.  I finally got over to where they were and we chatted a bit about sketching and the day and signing. That is part of the interesting part of sketching – you get to meet new people.  I told them I will post the finished work on my blog and gave him my card.

The guard told me that a photographer snapped a photo of my sketch over my shoulder, which is kind of cool and kind of intrusive at the same time. I’m happy that people think my sketching is interesting, but it seems rude to not ask to see what I am doing, and surreptitiously snap a photo.

There were also presentations about the life of a soldier in 1812. I got to see Meyers Brown, who is helping at my library with preserving the antique photos of Old Hickory. He was in full militia regalia. 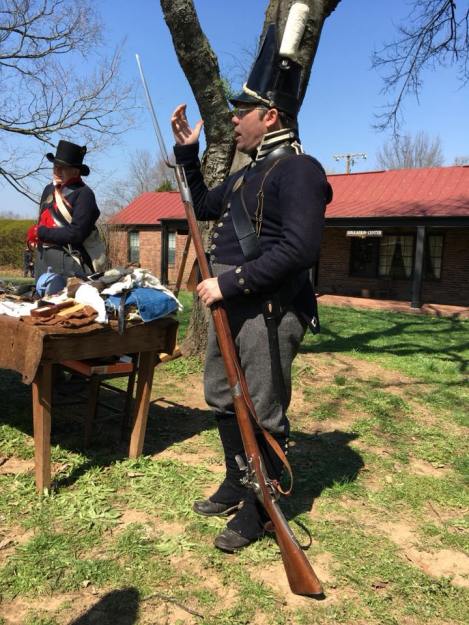 There were people in costume, including General Jackson and his wife Rachel.

I knew I would not have time to sketch them, and that it would draw a crowd.  I like to sketch privately so I don’t become self-conscious.  Nothing ruins a sketch for me than having someone look on.

And there was Irish music (since General Jackson was the son of Irish immigrants) performed by Brian Finnegan and Joseph Carmichael of Music City Irish Fest.  It was excellent. 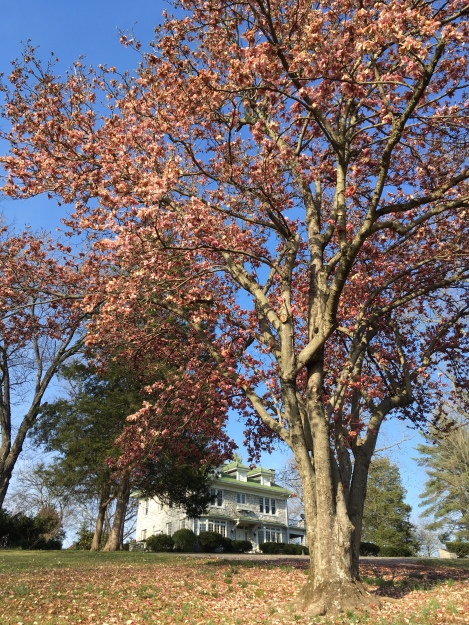 10:45 to 11:10 am, Tuesday morning before work. 59 degrees, sunny. I sat in my car and sketched while drinking coffee and eating cookies bought at the little café at the Hermitage. 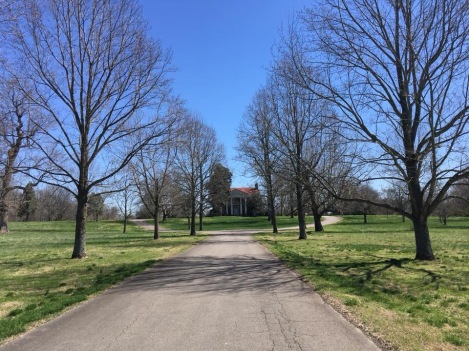 Let us look at some words from Paul.

“Then what is the advantage of being Jewish? Or what is the benefit of circumcision? 2 Much in every way. First of all, they were entrusted with the sayings of God. 3 So what if some did not trust? Will their lack of faith nullify God’s faithfulness? 4 May it never be! Let God be true even if every man is a liar, as it is written,
“that You may be righteous in Your words
and prevail when You are judged.”
5 But if our unrighteousness demonstrates the righteousness of God, what shall we say? God is not unrighteous to inflict wrath, is He? (I am speaking in human terms.) 6 May it never be! For otherwise, how will God judge the world? 7 But if by my lie the truth of God abounds to His glory, why am I still judged as a sinner? 8 And why not say, “Let us do evil, so that good may come”—just as we are being slandered and as some claim that we say. Their condemnation is deserved!
9 What then? Are we better than they? No, not at all.For we have already made the case that all—both Jewish and Greek people—are under sin. 10 As it is written,
“There is no one righteous—no, not one.
11 There is no one who understands,
no one who seeks after God.
12 All have turned aside;
together they have become worthless.
There is no one who does good—no, not even one!
13 Their throat is an open grave;
with their tongues they keep deceiving.
The poison of vipers is under their lips.
14 Their mouth is full of cursing and bitterness.
15 Their feet are swift to shed blood.
16 Ruin and misery are in their paths,
17 and the way of shalom they have not known.
18 There is no fear of God before their eyes.”
19 Now we know that whatever the Torah says, it says to those within the Torah, so that every mouth may be shut and the whole world may become accountable to God. 20 For no human, on the basis of Torah observance, will be set right in His sight—for through the Torah comes awareness of sin.”

Let’s look at 10-18 carefully. This “verse” isn’t written like this in one place. This is a hodge-podge. He says “as it is written” – but he’s assembled these various ideas from all over the Bible, and they aren’t quotations, but summaries. He’s rewriting the Bible to suit his own needs.

I am using the references that the Tree of Life version gives to illustrate this point. I am not coming up with these verses on my own.

Ecclesiastes 7:20
Surely there is not a righteous person on earth
who does what is good and doesn’t sin.

Psalm 13:2-3
2 How long, ADONAI? Will You forget me forever?
How long will You hide Your face from me?
3 How long must I have cares in my soul
and daily sorrow in my heart?
How long will my enemy triumph over me?

Psalm 5:10
10 For nothing upright is in their mouth.
Inside them is a ruin—their throat an open grave.
They flatter with their tongue.

Isaiah 59:7-8
7 Their feet run after evil.
They rush to shed innocent blood.[a]
Their thoughts are thoughts of iniquity.
Violence and ruin are on their highways.
8 They do not know the path of peace,
and there is no justice in their tracks.
They have made their paths crooked.
Whoever walks in them will not experience shalom.

This “verse” doesn’t exist. Paul strung it together, cutting and pasting what he liked into a whole unit of his choosing. My point – be sure to double check everything you read, even (and sometimes especially) in the Bible. Just because someone says something is true, even if that person is an authority, doesn’t make it true.

(All Bible quotations are the Tree of Life Version (TLV))

A brave day, I drove here by myself.  I didn’t let the monsters in my head win.  This is part of why I bought a membership here – to encourage me to go sketch.

This is the “Ruins” section – there are fragments of the original columns from the Tennessee Capital building, which was finished in 1854.  The limestone columns didn’t endure the weather and started to decay.  They were salvaged and brought here, to create a sort of small amphitheater.

(My scanner make the colors unusually bright and vivid) 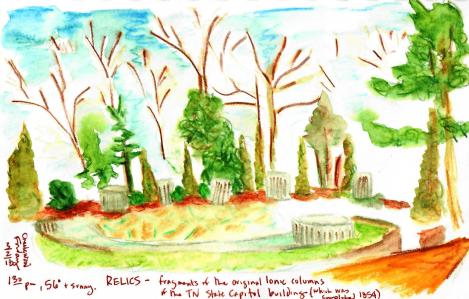 And an unusual view of the Japanese section – 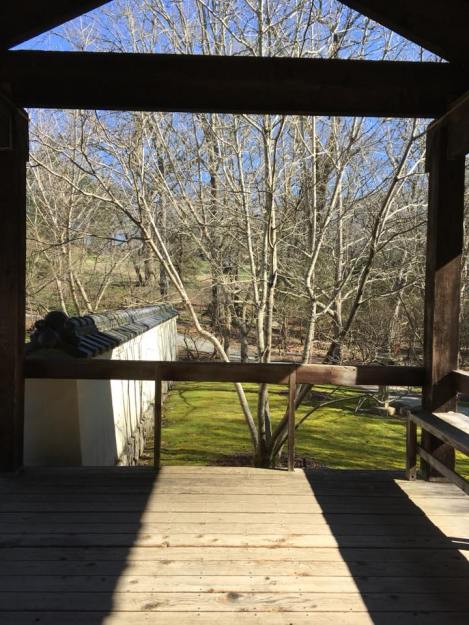