I have decided to go sketch outside once a week (at least).

This was at Stone Hall park, a tiny Metro park near my home.  It was a private residence that was built 1918.

I found a little porch where I could sit. 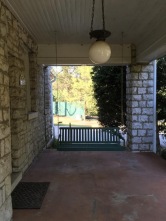 Here is the dry watercolor pencil version. This took an hour.

Here it is after I added water.

A lady named Julie came by and unlocked it.  She was cleaning it up for a wedding that afternoon.  I asked if I could go in.  She said yes.  I couldn’t believe my luck.

I’ve made up so many excuses to skip doing this for at least a year.  It was too hot or cold or sunny or wet or I was tired or needed to go to the bathroom or take leftovers home….and while some of these were applicable here, I went anyway because I had packed my supplies and a camp chair in my car.   I thought it would be a shame to not at least go and look.  I ended up spending over an hour here.  It was very invigorating.

Here is me inside the building.

This week’s sketching adventure was at Summit hospital. There is a small patio that is surrounded by the building. It is inside and outside at the same time. The door has been locked for at least a year due to construction and remodeling.

I’d been there a year ago (an annual appointment with my cardiologist brings me here) and was planning to sketch then.  The construction had just begun, so there was no way.  This sign greeted me this year – 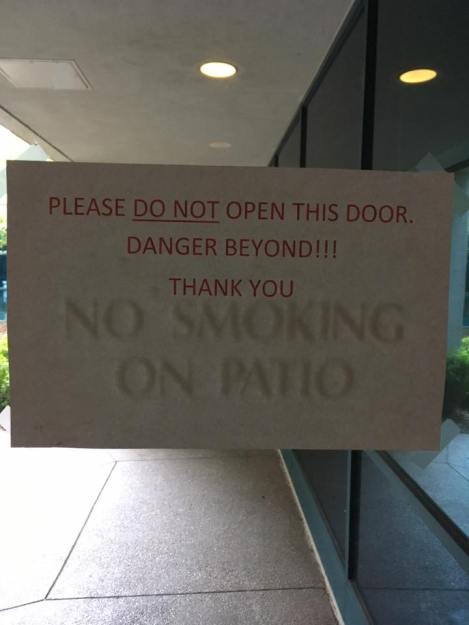 I looked.  I could see no danger.  I didn’t test the door.

I got a pumpkin spice latte at the coffee shop and sketched and photographed from inside, through the glass.  This was my view from the inside. 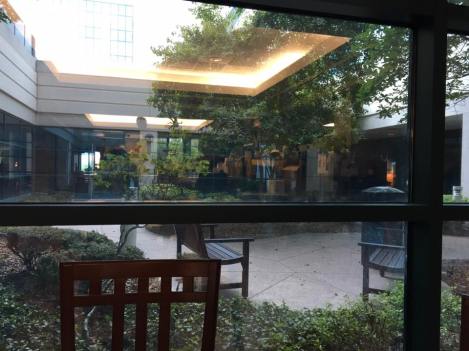 This is what I sketched (this is dry watercolor pencil)

It is more impressionistic than realistic.  I didn’t match up the angles in the top North East corner (9 to 10 on the clock), so there is a gap.  It is OK, and I was grateful to have done this – to have made time to do this.

But this wasn’t enough for me. I talked to three people to determine why it was still locked.  The second person didn’t even think people were meant to be out there.  When I told her there were benches, she changed and said “Ask Ann” and jerked her thumb behind her to a small window that was set up like a bank teller.  It turns out that Ann is in charge of the switchboard. I have decided that if Ann doesn’t know the answer, she knows who knows.  She made some calls. She learned that it was safe to open again.  She called a security guard to unlock it for me.

I’m the first person there in a year.

I was overwhelmed with joy and pride at my bravery in asking.  I quietly said the “Shehecheyanu” prayer  – – “Blessed are You, Lord, ruler of the universe, who has given us life, sustained us, and brought us to this moment.” 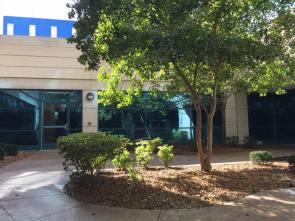 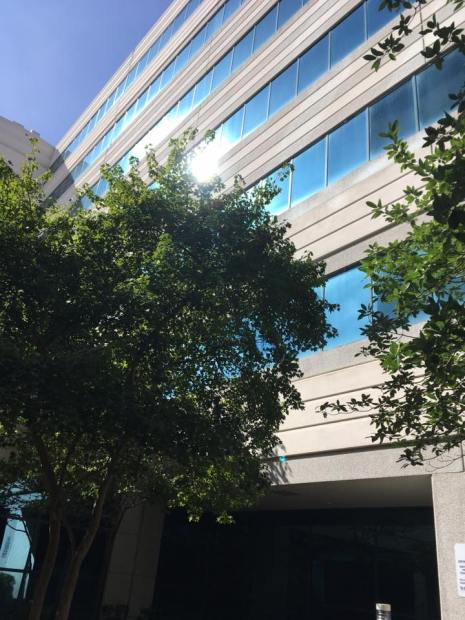 One picture could not cover it all.

Here is what it looks like after, with water added.

Sketching isn’t about drawing everything that you see.  It is more than a photograph.  The filter is your perspective – not only externally, but internally.  It is what you want to show.  It is about editing out the trash cans, or highlighting the blue reflection of the mirrored glass.  It is choosing to draw only three lines of windows instead of 5.

It is more than a photograph because it shows things from a human perspective.

I took the results to the three people who I talked to in order to gain access.  I said “here is the fruit of our labors”   – and only the coffee shop person even remembered me.  I’d been gone for an hour and the other two had talked to lots of other people in the meantime.  They had forgotten about me.

Ann was particularly taken by my sketch and said “Do you do this for a living?”  No – I’m not paid (yet) for my art.  I do this to live.  But I don’t make money at it.  She brought up a local artist, Phil Ponder.  To have my art compared with his is a huge complement.  She said “You have real talent”.  I am pleased with my work, but I don’t think it is that great.  But this is inspiring.   She also thought that it would be a shame for this to stay in my journal – that I should make it so it can be on display in the hospital.

We will see.  This would involve asking more people, making sure that it will actually be on display and not hidden in a corner.  It might involve re-painting it on bigger and better paper.  Getting it framed.  Do I pay for that – or do they?  Do I want to go through all of that work?