These are the color images of the photographs in my newest book, Images of God.  The color version of the book is expensive to produce, so I have also produced it as a black and white version.  This page serves as a supplement to that version.  All images are owned by me and cannot be used for any purpose by anyone unless specific permission is granted by me in writing. 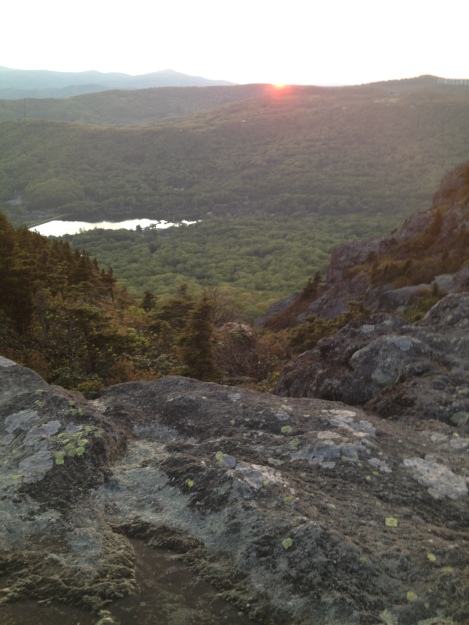 p.7  Autumn tree.  Taken in October 2016 in Old Hickory, TN, at the Old Hickory Church of Christ. I photographed this tree several times a week for the months necessary to document the change from summer to autumn. 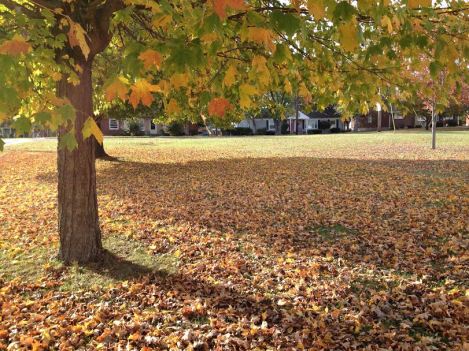 p.14  Japanese lantern.  Birmingham Botanical Gardens.  Summer 2015, on the trip to retrieve the ashes of my grandparents and father.

p.24  Bricks.  Lewisburg, TN.  On the side of a Presbyterian church on the main square, downtown.  Old and new bricks, two different colors, working together to build this building. Thanksgiving, 2015.

p.33  Mary at Calvary.  Taken at Calvary Cemetery, Nashville, October 2016.  This is a Catholic-only cemetery, with many graves of people who were born in Ireland.

p.39  DuBose.  Dubose Conference Center, near Sewanee, TN.  (University of the South).  An Episcopal retreat center.  Probably Spring 2013.  The trees in the courtyard had been cut down since the last time I was there, at Cursillo. 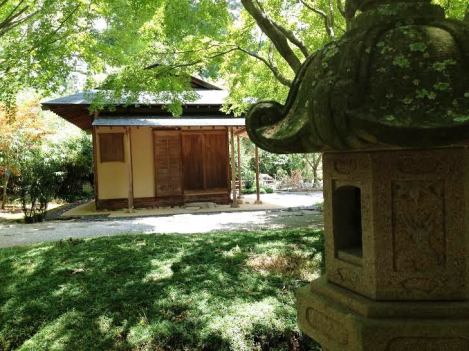 p.49.   Mercy Door.  Spring 2015, probably.  Mercy convent, Donelson TN.  Not to be confused with the Mercy Doors that opened in 2016 on order of Pope Francis to grant a plenary indulgence.  This door is to the sunroom for retreatants at this retirement center for Sisters of Mercy.

p.54    Grandparent’s home.  Birmingham, AL Summer 2015.  Mountain Brook area. When I knew it, it was just white, and the privet gave privacy to the front porch. My grandfather painted one side of the house white every year, rotating around.  Simple and efficient. This looks difficult to maintain.  Here, I said a prayer for this new family, that they not be haunted by the ghost of my father, who died here.

p.61   Church front.  Downtown Nashville TN.  Fall 2012.  On break from a Diversity in Dialogue class taken through work.  Lindsley Avenue Church of Christ.  The sign on the door said that it was open to all, but it was locked. 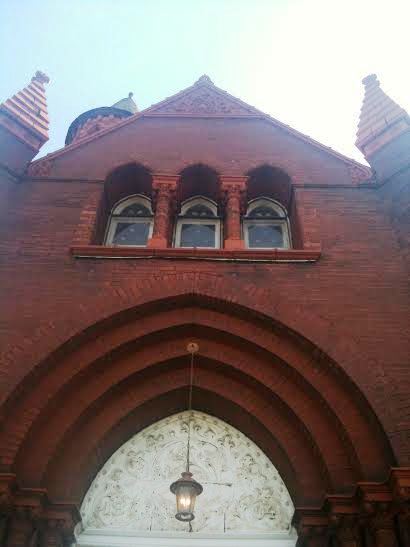 p. 69. Nest. At a meeting place called Atmology, in Nashville TN.  Probably 2015, at a Compassionate Nashville coffeehouse event.  A sitting area near a window – all cushions and rugs.  No chairs.  Intimate and cozy.

p.79  Torii gate.  Birmingham Botanical Gardens.  Summer 2015.  A place of demarcation, a gate without a lock.  I was in Birmingham to retrieve the urns filled with the ashes of my paternal grandparents and my father – all dead over 20 years.  Time to bury or scatter – no longer in a niche, hidden away at the back of a funeral home, at the end of a corridor filled with filing cabinets. Since I was going to Birmingham, I chose to be a tourist to all the places my grandparents never took me. The Botanical Gardens are free, and have a lovely Japanese Garden section.

p.90   Mary blue.  Taken at Mercy Convent, Donelson TN, perhaps fall of 2015.  Blue skies, downcast gaze.  She too is outside, in all weather, suffering with us.

p.95  Door knocker.  At Palmas Verdes, Hermitage TN 37076.  Probably 2014.  This is the entrance to the Ladies’ restroom.  Such detail and beauty in such an in-elegant location. 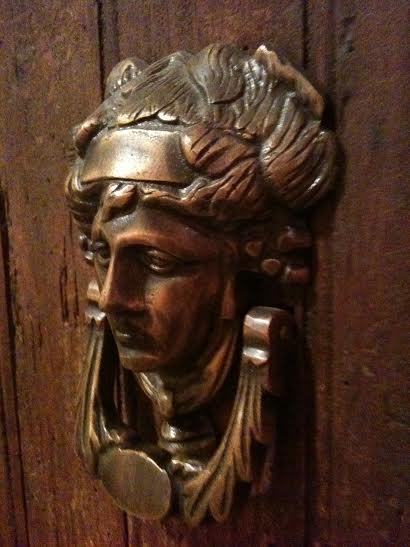 p.102  Mexican door.  Taken 2016, Hermitage TN at the Palmas Verdes Mexican restaurant.  I’d long admired this door with these lovely trees.  I’d planned to sketch it, but I was always in a hurry, or there was a car parked in the best spot in front of it, or the sky was overcast.  I took pictures so I could sketch it later when conditions improved.  In the meantime, they have cut down the trees and removed the beautiful hardware.

p.120  Window.  Detail of a stained-glass window at Mercy Convent, Donelson TN.  The colors speak to me.  When I see these windows, I know I’m there.  This is a motif throughout the building.

p.126  Holy light.  St. Meinrad’s archabbey, St. Meinrad, IN, September 2015.   The light near the aumbry, where the reserved sacrament is kept (the communion wafers that have been blessed) denotes the Real Presence of Christ, according to Catholics. 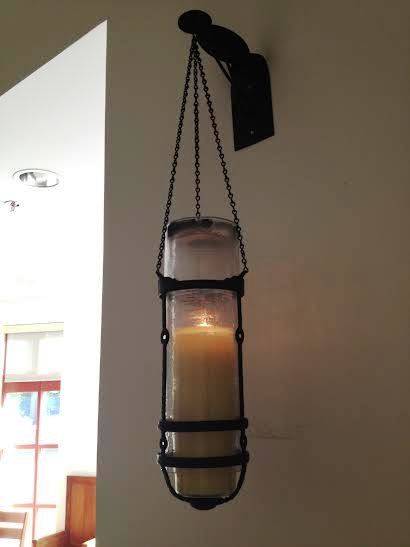 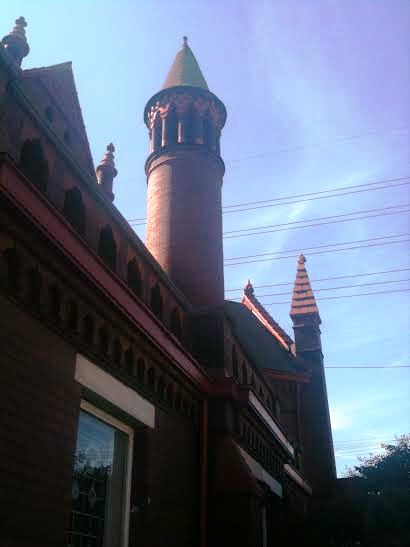 p.140  Tree with knobs.  Near the Hermitage Public Library, on a lunchtime walk.  There is a small park with trees, a huge sundial made of airplane wings, and a stream.

p.147 Spires at Calvary.  Calvary Catholic Cemetery, Nashville TN.  October 2016.  Dedicated to an Irishman who moved to Nashville in the 1800s.  A Holy Temple in miniature.

p.151   Detail.  Detail of a small stained-glass window depicting the Holy Spirit as a dove.  At Mercy Convent, Donelson TN.  Probably Spring 2015.  The prism turns the light into rainbows.  The statue of Mary next to it is illuminated by this light.

p.157  Rust map.  A trash bin, rusted, paint peeling.  It looks like a map of some city I’ll never find in this lifetime.  Hermitage TN recycling center, near the Goodwill and Big Lots and Hobby Lobby, perhaps Autumn of 2014. 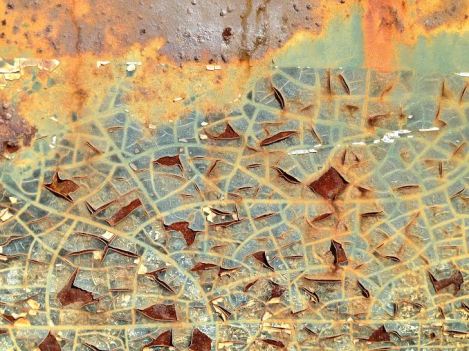 p.163  Communion.  The cut-glass dish for holding communion wafers at Mercy Convent, Donelson TN.  The image reveals the Star of David. The people taking communion would not see this because it normally would be covered by the wafers and/or held by the priest.

p.167  Mary at St. Meinrads.  The images of Mary at the monastery of St. Meinrad’s (in St. Meinrad, IN) are in the woods.  She is not in the church.  She is outside, in the wilderness.  You have to look hard to find her. She is not on the map.

p.172  Abandoned house. Across from Blu Fig restaurant in Nolensville, TN.  Possibly spring 2016.  This structure is no longer present. Presumably abandoned because of the nearby road construction.