This courtyard was off limits the last time I went to St. Meinrad’s. The monastery itself was being renovated – they are upgrading to geothermal energy.  It is quite expensive, but will pay for itself in just a few years.  The necessary plumbing changes that go with it meant that all the monks had to be relocated to rooms that were usually used for guests or seminary students.  This meant that a courtyard that had been open in the past was closed off for their private use.  I was especially sad about this because I’d looked at maps before coming here and especially wanted to prowl around in this one.  Just two days before we came here on retreat, the monks were allowed back “home”.

Here is the covered walkway to it.

I was a little overwhelmed – take it all in, or start taking pictures?  It is hard to “be in the moment” with a camera in front of your eyes.  But I also wanted to share this space with you, and to be able to process this experience later.

I wonder what kind of tree this is?  I wonder who planted it, who chose it.  When was it planted?  Has this one always been here, or is it a replacement?  Does it have special meaning?  Was it dedicated to someone? 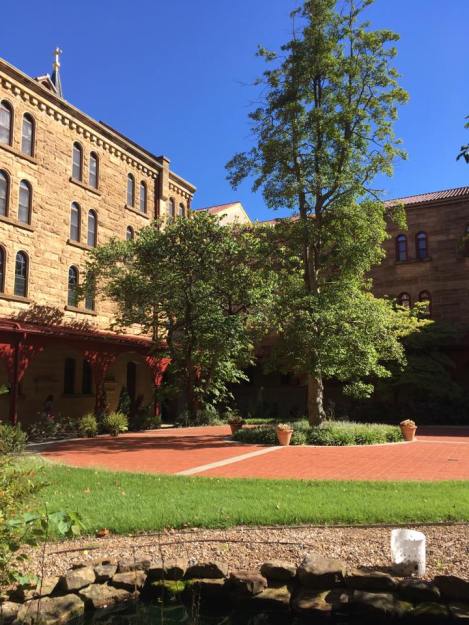 Notice the solid architecture.  This place is designed to last.  Nothing temporary about it.

But, as always, I think – is that what Jesus wanted – for the Church to build for itself?  Aren’t we called to take care of others?  How many poor people could have benefited from this?  If all the poor are fed, clothed, housed – then the Church can build such things for itself. 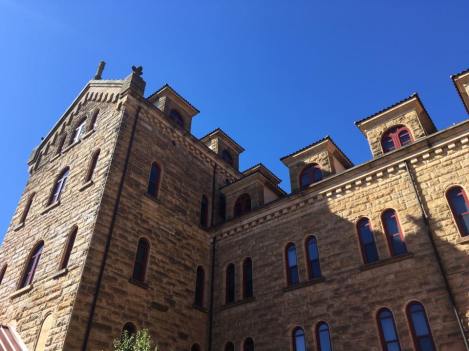 There must have been a campaign to donate the paving tiles.  I wonder if these people knew how shallow the inscriptions are?  They won’t last more than a few years.  Just like gravestones, they’ll fade away.

It seems like it would have been better for the Church to get these people to donate towards a place to help the needy instead – a halfway house, a drug treatment center, a shelter for battered women…

This is the most symbolic part – but I’m sure nobody else sees it.  A dead tree.  Why is it still here?  Why keep it?  Sentimentality?  Much of the rites and rituals of the Church are like this tree – kept out of habit.  They no longer are connected to the Vine, the Living God.  Yet they are kept, enshrined, memorialized.  Idolized.