There are places at St. Meinrad’s Archabbey that are most certainly off limits.  They spell it out with signs, saying that you are not welcome in this area. 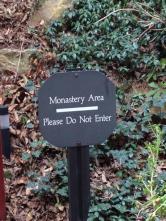 There was one area that had a sign and a frosted glass window.

But there was a clear spot higher up, so I just held up my camera.

There is a lock on the holy oil vials, presumably to keep you from accidentally anointing yourself, or from desecrating it.  Wonder why these vials are on public display then, if they are not for public use?  To show off how pretty they are? These were prominently displayed at the center of the Abbey.

There are enclosed gardens that I wanted to explore.  I saw them on Google Maps before I went there and looked forward to going.  There were not open to lay people, however.  But there were windows, so I took pictures. I was sad to see them not even being used by the monks.  These beautiful gardens, alone, locked away, unappreciated.  Perhaps the monks stare at them from their rooms, while they are locked away from the world they are called to serve?

They even tried to block the view with signs like this.

But I found a way around it.  These pictures are taken through the glass. 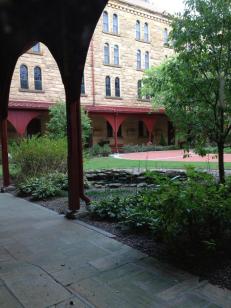 Monasticism as it is practiced was not mentioned by Jesus at all. Living together, sharing resources, sharing lives – yes.  It is good for all to work together for the common good.  However, he did not intend that we were to separate ourselves from the world entirely.  When we work together and share what we have, we are stronger people, better able to help others.  However, when we focus all of our energy inwards to the group, we defeat the purpose of what Jesus calls us to do.

With all these signs, I was continuously reminded of the “us and them” approach the Catholic church has to life in general – either you are “in” (a Catholic) or “out” (either not Christian, or just not Catholic).  The most obvious example of this is with their approach to communion.  This exclusionary practice is not Christ-like, and will turn more people away from the message of Jesus than they could ever imagine.

Interestingly, I spent time at their “sister” community, just down the road a few months later.  The Sisters of Saint Benedict have a community in Ferdinand, IN, called Monastery Immaculate Conception.  I walked all over that place and only saw one sign saying “private”.  In fact, the nun who took us on a tour of the place told us we could sit in that area if we wanted.  I’m pretty sure I accidentally wandered into some areas I shouldn’t have, but nobody got upset with me.  Their monastery was older, a little shabbier.  It was obvious that their “brothers” got more money and better resources.  But the Sisters were far more kind and welcoming, always helpful and kind, with open smiles.

I like tabouli, but I don’t like raw onions. I also think kale has far more health benefits than parsley. This twist on an old classic delivers familiar tastes in a new way.

Half a bunch of kale (about 8 to 10 stalks) – destemmed, torn into pieces

One large tomato, seeded, cut into bite-size pieces (just use the fleshy parts)

Lemon juice to taste (at least a tablespoon)

Method
Julienne the onion and sauté it in the olive oil. Add seasoning salt (I use “Aunt Cora’s”). Stir often, cooking it until the onion pieces are translucent but still firm. Do not caramelize or wilt them.

Meanwhile, steam the kale. About 5 minutes in, stir it with a fork to further reduce its size.

Remove half the onion to use later. (see notes) and add the tomatoes and kale.

Add lemon juice. Stir frequently. Do not let the tomatoes get mushy.

Notes
I find it easier to cook the entire onion and save off half of it for another use. Store in the refrigerator and use within 4 days.