Here is an exercise to dig down deep.

Choose a picture of a place where you spent a lot of time as a child. Perhaps this was your old family home that you moved from. Or a family friend’s house. Or your elementary school playground. It is important that this be a place that you have a lot of memories about.

Make a color copy of the picture and paste it into your journal. Don’t use an original picture or you won’t feel free to work with it like you need to.

You might be able to find a picture online of this place if you no longer have a photograph (you moved, for instance). Use Google image search and put in the address in question. You might be surprised what you can find, as real estate agents often take many pictures and leave them up even after the house has sold.

Write a map grid around the edges – evenly space letters on one side and numbers on the other side. 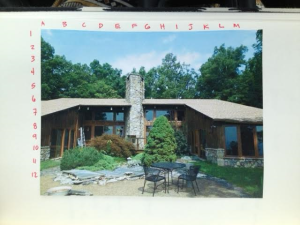 Use this grid to refer to elements in the picture. What happened in each place? What does that remind you of? You can go as deep as you want, and as off subject as you want. Nobody has to see this. Keep writing about what happened in that one area until you wind down. Move on to another area. Repeat. You can use different colors to help keep track of your wanderings – first thoughts, tangents off of that, for instance.

You don’t have to start at the top and work your way down. You can write about whatever catches your fancy first and go from there.

Many different things will come up while you do this – memories that you’d long forgotten. This is a time to cherish the beautiful ones and heal the hard ones. You are older now, and stronger, and better able to work with them. Events are tricky things when we are younger – they might be too heavy for us to carry. When we get older, we have more tools at our disposal. This is a special time that you have to work on them, a second chance.

At the end, thank yourself for giving yourself permission to do this work.

Tracy and Robin had joked for years before they got married that people never knew who was “he” and who was “she” of the two of them. They decided that it was nobody’s business, so they never let on.

Tracy and Robin were drawn to each other not out of a sense of finding their other half, but in finding another person who was whole. Both were perfectly comfortable repairing a car or knitting a shawl. Both could mow the lawn as well as cook. They felt lucky that their parents had taught them both how to be people first and foremost. Their gender was never used as a reason for or against learning anything.

They both hid their gender, not out of a sense of privacy or shame, but out of a sense of rightness. They wanted people to relate to them as people. The first item of prejudice was gender. Sure, you could add race, religion, creed, national origin and a host of other things up to and including what football team they rooted for. People used any excuse they could to pigeonhole you, to decide who you were before you even opened your mouth. Tracy and Robin figured that the more you can avoid those markers, the more people would have to make up their own minds for a change.

They were mindful to shop only where the bathrooms were genderless. Sometimes the buildings were old and only had one restroom with a single toilet. Sometimes they had family restrooms. They didn’t want to have to out themselves if they could avoid it.

They shopped at thrift stores, getting whatever clothing that struck their fancy and wasn’t too snug. Both were equally comfortable in pants or skirts. They were pleased when they could find clothing that was from immigrants because it was often loose and ambiguous. Comfort was the most important thing.

It was always assumed that one was female, but it wasn’t a given. Both could have been. Or neither. Or one or both could be intersex. Did it matter? Nobody separates by eye color or height, so why separate by something as equally meaningless and random as gender?

Mr Michaels’ blindness was absolute. Born sighted, it had been 20 years before the cataracts had begun to form from the kiss of sunlight.

It happened so slowly at first, like a fog creeping in on cat’s paws. Every month the dull haze thickened, coalesced just a little more. It was so gradual that he never even realized his sight was being stolen from him until it was gone. It was as if his sight was a stone and the sun was the sea, washing it away to nothingness, no trace of it ever having been there.

It was nothing to Mr Michaels. His sight had gone so gradually that he’d forgotten he’d ever had vision. Just like that sea-stone, all evidence of its existence was erased. Just as slowly and just as insistently, his memory of sight had dissolved as well. He could no longer remember his mother’s face or the color of the sky in early November, could no longer even remember that he had ever known these things.

All his life he had worked outside. Perhaps it was an undiagnosed case of claustrophobia. Perhaps he was just set in his ways. His first job had been in landscaping, and every one after that had been related. Grounds crew for a municipal park, another one helping harvest apples, it was all the same to him, as long as he was outside.

His father never knew if he’d ever tried for anything more advanced. He never asked, but he’d been tempted to often. He wanted to encourage him to be his best rather than settle, but he remembered his own father doing the same to him and he still resented him for it. Perhaps this was his best? Perhaps he led a simple life because he was simple? Best not to dig too deeply.

Mr Michael’s hands became his eyes, showing him the size of the bulb or seed that he held. He then knew how far down to dig to plant it. His hands told him where the weeds were to pluck, told him what apples were ready to harvest and which ones were best left for the birds. His feet told him how far the flower bed was from the orchard, how far from the stables. His nose told him whether the horses were sick or scared. His ears told him whether a storm was coming, and whether it was going to be strong enough to warrant bringing the animals in early.

Watching him work, you’d never know he was blind. By tacit agreement, all the other workers on the farm kept everything where it had always been. That one incident with the misplaced hay bale had been enough to convince them.

It was only when you looked directly into his eyes that you knew beyond a shadow of a doubt that he was blind. Very few people were brave enough to do this more than once.  Looking into his milky eyes was like looking into a pair of mirrors set just opposite each other.  All you could see was yourself, all of yourself, unto eternity, ever diminishing into meaninglessness.  It was overwhelming and humbling.  You could see all of your strengths and all of your faults, unvarnished, untampered by the usual lies you told yourself.  This alone was unsettling, but the additional feature of his gaze was to leave you with an overwhelming sense of your utter insignificance.

Mr Michaels was completely unaware of this.  He wasn’t bothered in the slightest that people tended to leave him alone.  It meant he had time for his own amusements.  That suited him just fine.

I’m no longer growing up
but in,
strengthening my foundation,
clearing out old misconceptions
and flat out lies
I learned
or was taught.

This isn’t housekeeping.
This is a major renovation,
a re-new-ing.
This is tearing out the floorboards and joists
and digging down to bedrock
to reseat the base.

There’s no plan for this,
no map.
There can’t be.
Each house,
each person
is site specific.
Nobody else’s plans will work.

How can you grow up
if you don’t have a strong base?
The tree falls over
if the roots aren’t deep.

So for right now,
I’m growing in.