All the missing people were here, on the other side of this door. Well maybe not this exact door, but one like it in shape or color, if not style.

They all came here eventually, either on their own or with a guide. But even that wasn’t guaranteed. Guides could only come here once and then they had to disappear too.

There were plenty of robin’s-egg blue doors, and plenty of others that were arched. Not all of these were part of churches, but many were. Churches were the best place for secrets, after all.

Perhaps it had started with confessions, where deep sins were revealed and had to be hidden away. It wouldn’t do to have anything escape the confessional. Then word would get out and nobody would come. Without confessions, the church might as well cease to exist. Those relieved of their burdens were often so grateful that they tithed more. It wasn’t a one-to-one correlation, you understand. It wasn’t as if the priest said “say 20 Hail Mary’s and put $200 in the offering plate” but it worked that way anyway.

But there were plenty of other lost people who came through doors like these. People who’d lost their way in the world. People who didn’t fit in. People who were unwanted, or who just felt that way.

Children weren’t allowed, at least not in this kind of sanctuary. There was a sort of asylum for them, there had to be. Plenty enough children went missing over the years, so there had to be places for them. But this place was permanent. This place was no turning back. This place was more serious, more forever than marriage. There were vows here too, legal documents to sign here too, but there was no change of heart when things got tough. To be more accurate, hearts could change but the situation wouldn’t. No matter how much you begged or pleaded or cried, you could never go back through the doors into the real world. This was your world now.

Plenty came who were turned aside, deftly but firmly informed that there was no such place here. They left, confused, still searching. Perhaps they would find a different clue, overhear a different snatch of conversation. Perhaps they would locate another safe house entrance. Those who were turned aside were fleeing problems – money, love, drugs, either too much or not enough. They wouldn’t last here, wouldn’t be able to knuckle down and get to the business of really living this new life. They would be the first to want to leave and the last to settle down when they finally were made to understand there was no going back.

What is Jesus referring to when he says the following words to Nicodemus?

14 “Just as Moses lifted up the snake in the wilderness, so the Son of Man must be lifted up, 15 so that everyone who believes in Him will have eternal life.”

He’s referring to when the Jews were wandering in the desert. Once again, they are impatient and irritable. Once again, some of them complain. The Lord sends snakes to kill many of them as a response. Here’s the story he is referring to –

Numbers 21:4-9
4 Then they set out from Mount Hor by way of the Red Sea to bypass the land of Edom, but the people became impatient because of the journey. 5 The people spoke against God and Moses: “Why have you led us up from Egypt to die in the wilderness? There is no bread or water, and we detest this wretched food!” 6 Then the LORD sent poisonous snakes among the people, and they bit them so that many Israelites died. 7 The people then came to Moses and said, “We have sinned by speaking against the LORD and against you. Intercede with the LORD so that He will take the snakes away from us.” And Moses interceded for the people. 8 Then the LORD said to Moses, “Make a snake image and mount it on a pole. When anyone who is bitten looks at it, he will recover.” 9 So Moses made a bronze snake and mounted it on a pole. Whenever someone was bitten, and he looked at the bronze snake, he recovered.

This time is different from the many other times they have complained. Often it is Moses who intervenes, but here the people admit that they have done wrong. Often Moses steps in to avert a mass destruction of all of Israel by the Lord when they are ungrateful. This time they realize they have sinned and ask Moses to intercede with the Lord for them. The Lord tells Moses to mount an image of a snake on a pole, but they have to look at it. They have to seek it out to recover.

What Jesus is saying is that in the same way and for the same reason, he is to be mounted on a pole. Only those who admit that they have sinned and seek him will be saved from death.

At the retreat center I went to in September, there is a confessional in a separate room on the way to the chapel. The priest goes in first and sits behind the screen. 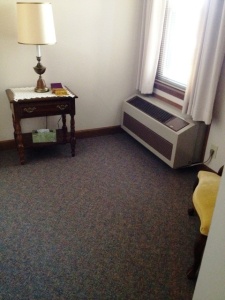 The confessee goes in separately and sits in the front section. 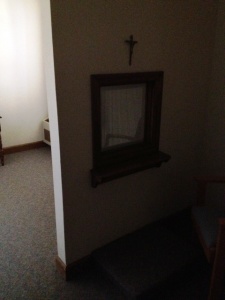 Here is the screen he sits in front of. It means that his identity is obscured. This is supposed to mean that he can speak freely, without fear of judgment. 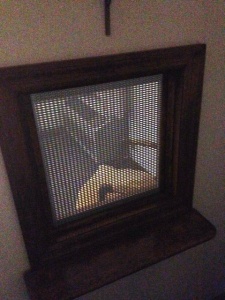 I was amazed at the difference in the two sections. The area for the priest is three-quarters the size of the confessee. The priest’s chair is large and comfortable. The other chair is small and hard. The priest’s area is filled with light. The other area is dark and depressing.

Now, the point is that all of our sins are already forgiven. Priests don’t forgive sins. Jesus does that. Jesus did that on the cross. The priest just reminds you of that. Sometimes they get that part mixed up.

This is a painting that is visible to both people. I don’t know the story behind it. 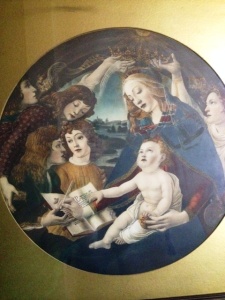 If you are a people watcher, working in the library is one of the greatest jobs ever. You don’t have to wonder about people’s stories. They come right up to you and tell you most of the time. But sometimes I get a real stumper.

Yesterday I saw a lady who had a sign taped on her bag with two-inch packing tape. It was a full legal sheet of paper where she had scrawled “John Smith had me beaten up”

Notice the verb tense. Not “John Smith beat me up.” It was something that was contracted out. So there was an extra party in this story.

Of course the name wasn’t John Smith. I don’t recall the name. Her handwriting was messy. The name looked like a Hispanic name, but that is all. I’ve chosen a generic name.

This confused me. Why would anybody do this?

Is she trying to shame him?

Is she trying to show she is a victim?

Maybe a little of both?

She was in her mid 50s, about 100 pounds and 5 feet tall. She wore sweatpants. Her hair was very black and very short. Her accent sounded like she was from New York. She was friendly enough, but a little jumpy. I’m giving you this information so you have as much to go on as I do.

Sometimes I only have puzzle pieces. I hope to see her again. This was the first time I have seen her. Perhaps I’ll ask her about the sign if I see her again. Obviously it isn’t a secret if she has it taped on her bag.

There are plenty of things I would like to ask patrons about, but I don’t because it seems like it is not my place. But the best part is, I usually don’t have to ask. They just tell me anyway. I have no idea if it is just part of the job or something they see in me that says “tell all your private information”. This never happened when I worked retail. Some days I feel like I’m in a confession booth or a counselor’s office. Of course, if I was, I couldn’t write about it.

The test is rigged.

There is no way you can win with the idea of original sin. If you say that humans are faulty from the very beginning, broken and sinful down to our very core, then there is a problem.

This mindset causes dependency. It creates in people a feeling of never being good enough. That they never will measure up.

Nothing that is from God is bad. So we were made with free will and curiosity. We are finite where God is infinite. We are mortal. We break. Things aren’t effortless for us. We need a little help. We can’t understand and follow all the rules.

So then Jesus comes along and tells us to love. He breaks down all the rules into two – love God, and love your neighbor. Seems simple enough. Then he pays our tab for us – our debt of sin is paid. Some people need to hear that. But perhaps what he really was doing was just saying that we are fine the way we are. We aren’t perfect and we never will be. We can’t ever win, because the game is fixed. He’s letting us know that we are ok. We aren’t to blame for our nature, because it is just the way we are.

Now would be the time that somebody will quote from Paul or point out that “whoever is without sin” gets to cast the first stone. Nobody gets to throw stones. Because throwing stones isn’t showing love. Thinking you are better than somebody else isn’t being loving.

Rather than load people up with guilt about their sin by making them say the confession every week, why not turn it around and teach people different ways they can be more loving and compassionate?

Every week, every day, every minute, we aren’t going to measure up to the idea of being perfect. We never will be perfect. We can’t be. That isn’t human nature. Focusing on our sin keeps us pointed in the wrong direction. We need to learn how to be better at what we can do, rather than on what we can’t do.

We say that Jesus paid for all our sins. So why do we keep pulling them out and focusing on them? This seems pathological.