Something disturbs me about burial.  It isn’t the idea that my body will be in a coffin and then under several feet of dirt (six isn’t the norm, by the way).  I won’t need it anymore.

Why bury?  So someone can visit me? I’m not there – not the part that matters anyway.  What if they don’t, however?  There is something so sad about abandoned graveyards. 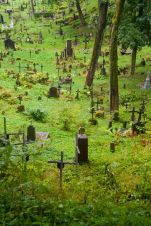 In theory, when you buy a grave site, some of the money is put into a trust for the perpetual upkeep of the grounds.  But who oversees that?  What happens if it doesn’t happen?  Who notices?

And then there is the idea of flooding.  Sometimes this happens.

This was in 1994 in Georgia.  Officials had a bear of a time figuring out who was who to rebury them correctly.

And then there is archaeology.  They call it science when they dig up somebody and show him or her off in the name of education. This is Genghis Khan’s grave.

So how is this not desecration?  How is this not violation?  So much for “rest in peace”.  This wasn’t the intent when he was buried – to be dug up and shown off.  This is rude.

And then there is what the Catholic church does to saints.  A “first degree relic” is the entire body – or a piece – of a holy person.  Rather than hoard up all that saintly goodness in one place, it is common to divvy them up.  A finger here, a toe there, a head there… This is in complete violation of their policy that members cannot scatter the ashes of their loved ones.

Graves aren’t permanent.  Bodies can be dug up, and have been.  One reason for the modern “grave liner” or “vault” is that it deters people from digging up a body.  Why would they?  One never knows the reasons for the strange things people do – but it has happened enough that there is a need to protect against it.  Sure, my body isn’t being used by me anymore, but I’d hate to think of someone doing something perverse with it after I’ve vacated it.

Then there is veneration.  This is Jim Morrison’s grave in Paris.

This does not seem respectful.  Look at all the graffiti on all the nearby graves.

The Tibetans practice “air burial”.  A person cuts up the body to make it easier for the animals to eat it. The dead body feeds living beings.  Every part of the body is useful and benefits others.  While to Western sensibilities this seems disrespectful, it is far more generous and giving than putting the body in the ground to rot.  No coffin is used, no grave is dug.  It is much less expensive on the family.  Also, there is no chance that someone will idolize the dead body by returning to the grave.  The person isn’t there anymore.