The Village had no place to hide. They’d planned it that way from the very beginning. Decades later, the influence of the Company could still be felt.
They’d laid out the streets in an arcane pattern which would have been instantly recognizable to ancient alchemists. It was reasonable after all, since the Company were modern alchemists. However, they were no longer trying to convert base elements into gold, but into bombs.
The Company was all about control. It had to be. What with such volatile elements under their purview, control was a matter of life and death. The only problem was that they did not know when to stop.
They thought the same about their employees as the elements that they worked with – unknown, potentially dangerous. The Overseer decided early on to keep them isolated from the city at large and then to further segregate them by function. It was best to keep the workers from mingling with the supervisors, and both from regular citizens. Explosions could not be ruled out. Separation was for everyone’s safety.
They’d done their job too well. Even now the people who lived in the Village, no longer a Company town, still were isolated from the rest of the city and suspicious of anyone who had not lived there for at least 20 years. Even that wasn’t a free pass, with any aberrant behavior transforming a “friend” to a “foe” at the speed of a post on their neighborhood watch’s Facebook page.
The layout of the neighborhood created invisible walls that focused energy and attention inwards. It was a feedback loop. It was a closed circuit. Day after week after month after year it built up with no release. Like crabs in a pot, they clawed at each other, keeping the whole group down, preventing escape. Little did they know that they were all doomed.
Only the Overseer could have predicted this.
It was his plan all along.
On the surface it seemed like a great place to live. All the houses were built by the Company for their workers. The school, the library, even the gymnasium were provided. All the workers had to do was show up to work and put in eight hours every day excepting Sundays. Everything was paid for through their wages. They didn’t have a lot of money left over for personal needs, but they felt it was a fair trade-off to be able to live in a model community. They were told that here their children would be safe, protected from the dangerous elements of the rest of the city.
This inward-facing community was their undoing. With no new information, no variety, no challenge to the status quo, the Village stagnated and degenerated. It became inbred, where aberrant and defective ways of thinking became the norm rather than the exception.
They never saw it coming. The wall surrounding their village and their minds was invisible but no less effective because of it. Perhaps it was more effective because it was invisible. They didn’t know they were trapped, thus they had no reason to try to escape. Why would they? It was perfect here, they all agreed. Those that didn’t agree were silenced in the way that works best – by declaring them crazy. Why martyr someone by forcing them to leave the community? Excommunication wasn’t just for the Church. It was far better to keep them as an example of how not to behave.

Have you ever come across a wall that you didn’t even know was a wall?

Now it is more interesting. Now we have the DVDs that are on hold behind the counter. They started getting taken by people who didn’t have them on hold, so we had to move them here. The shelf for these holds is right next to the end of the counter. We’ve told the regulars to just go ahead and get their DVDs if we are busy. They still see the wall. They still don’t want to. Sometimes they will stop, just at the color change on the carpet, and lean in as far as they can to get their movies.

And it got me to thinking. What other walls are there? What else is there in my head that I’ve been programmed into thinking is something that can’t be done, some rule that I’m breaking?

The view from the patron’s side. 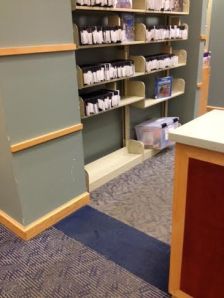 The view from our side. Notice that the carpet is different on our side versus their side.

That dark blue line is used throughout the building, wherever there is a post or a counter. It probably makes it easier to blend carpets when they come together around a difficult corner. I don’t know if the blue part is the bit that stops people, or that it is the end of the counter.

What “walls” do you have? What prevents you from doing something? What has been programmed into you, that you needed to know then but don’t need to know now? What have you generalized as a “rule” that really is a “suggestion”?