The prayer shawls used by Jews today were not used in antiquity. They evolved from the everyday item of clothing they wore that had four corners to which they affixed tassels (called in Hebrew “tzitzit”) per the Lord’s command. The Torah has two places where Jews are instructed to wear tzitzit on their clothing.

Numbers 15:37-38 37 The LORD said to Moses, 38 “Speak to the Israelites and tell them that throughout their generations they are to make tassels for the corners of their garments, and put a blue cord on the tassel at each corner.
– and –
Deuteronomy 22:12 “Make tassels on the four corners of the outer garment you wear.”

Why did the Lord command this? Numbers 15:39-40 explains. 39 “These will serve as tassels for you to look at, so that you may remember all the LORD’s commands and obey them and not become unfaithful by following your own heart and your own eyes. 40 This way you will remember and obey all My commands and be holy to your God.41 I am Yahweh your God who brought you out of the land of Egypt to be your God; I am Yahweh your God.”

Only Orthodox Jewish men wear the four-cornered garment with tzitzit these days. For all other Jewish men, there are prayer shawls that serve the same purpose. The shawl is usually worn only during morning prayer, while the garment is worn throughout all the daylight hours. It is rare for Jewish women of other denominations to wear the prayer shawl, and they never wear the garment.

The prayer shawl itself is not important – the tassels (tzitzit) are. They are to serve as a constant visual reminder of the oneness of God and of the need to fulfill God’s commandments. Interestingly, they serve as a reminder not only to the wearer, but also to anyone else who can see the tassels.

The tasseled four-cornered garment that the Orthodox Jews wear is worn underneath the regular clothes and is called a tallit katan, meaning a “small tallit”, or it is also called arba kanfot, meaning “four corners”. It is popularly known as simply “the tzitzit”, while the large prayer shawl is commonly known as “the tallis”.

Here are examples of the tallit katan (or arba kanfot)

There are no specific requirements as to the size or color of the tallit. The most important thing is that it has four corners that tzitzit are affixed to. Some tallits are large enough to wrap over the head to make a sort of tent so that the wearer can be in seclusion with God while he prays. Some are so narrow that they look more like scarves.

One side is given a special band, called the Attarah, to mark the top outside of the Tallit, as it is considered a garment and thus must not be worn upside down or inside out.

The Tzitzit have very specific and detailed ways that they are tied and knotted. There are different opinions as to exactly how many knots and wraps around the group are to be done, but each style has significance. In the past, one thread was always a royal blue, but some experts say that the source of that color has been lost, so rather than get it wrong they recommend using all white threads to create the tzitzit.

Here are various examples of tzitzit – 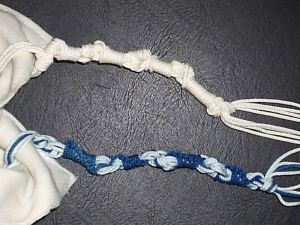 Here are examples on how they can be knotted – 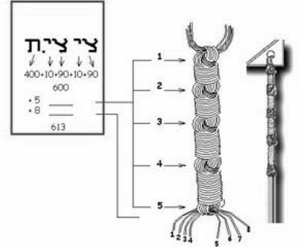 Then, when putting on the Tallit, one says the blessing:

Note that we are commanded to wrap ourselves in the tzitzit, not the tallit. The fringes are the focus, not the garment that holds them. The prayer shawl itself is just a vehicle for the tassels.

Then you pull the Tallit over your head and wrap the two tassels of the right side over the left shoulder and recite the following verses from Psalms 36:8-11.

Matthew 9:20-21 Just then, a woman who had suffered from bleeding for 12 years approached from behind and touched the tassel on His robe, for she said to herself, “If I can just touch His robe, I’ll be made well!”

Matthew 14:36 They were begging Him that they might only touch the tassel on His robe. And as many as touched it were made perfectly well.

It is worth noting that the tzitzit are visible most when we have our eyes downcast, as when we are depressed. It is then that we most need to be reminded of the closeness of God. Following God’s commandments helps us to get back on the proper path, and seeing the tzitzit remind us to do so.

Resources:
“The Complete Artscroll Siddur” by Rabbi Nosson Scherman
“The Complete Book of Jewish Observance” by Leo Trepp
“How to Run a Traditional Jewish Household” by Blu Greenberg
“Understanding Jewish Holidays and Customs: Historical and Contemporary” by Sol Scharfstein
The Chabad website
All Bible translations are from the Holman Christian Standard Bible.

There is a ministry that some churches are participating in where they make prayer shawls. However, they aren’t quite getting it. The shawl isn’t the point. The tassels are.

Numbers 15:37-41 (HCSB)
37 The LORD said to Moses, 38 “Speak to the Israelites and tell them that throughout their generations they are to make tassels for the corners of their garments, and put a blue cord on the tassel at each corner. 39 These will serve as tassels for you to look at, so that you may remember all the LORD’s commands and obey them and not become unfaithful by following your own heart and your own eyes. 40 This way you will remember and obey all My commands and be holy to your God. 41 I am Yahweh your God who brought you out of the land of Egypt to be your God; I am Yahweh your God.”

The church groups mean well, but they are making the shawls and not the tassels. Fringe doesn’t count. The tassels are to remind you to keep God’s commandments. When this commandment came, God said simply to affix the tassels at the corners of their garments. This way the person would see them.

Later, the Jews made a special garment that has the tassels. This is still not the “prayer shawl” – it is for everyday use if you are an Orthodox man. It is called a “tallit katan” and is a four-cornered garment, kind of like a poncho. It has a hole in the middle to put your head through. It is put on in addition to regular clothing. They have a separate prayer shawl just for special prayers. It can be a range of sizes, as long as it has four corners and each corner has the prerequisite tassel. The tassels are not just any tassels – there are very exacting rules about the length, color, and number of cords in them and how they are knotted.

The tassels are “tzitzit” and the shawl is a “tallit”. A tallit without the tzitzit is not a prayer shawl – it is a piece of cloth. Even if one of the tassels is frayed, the whole thing is invalid as a prayer shawl.

I like the prayer shawl ministry – it lets the other person know that people are thinking about them. They get a tangible reminder of the love that others have for them. Plus, a blanket is like a big hug. Every time they feel lonely, they can take this shawl and wrap it around themselves and feel better. This is great – but it isn’t a prayer shawl in the Jewish sense. Perhaps there needs to be another name for these Christian “prayer shawls”, or a distinction spelling out that they are not the Christian version of a Jewish prayer shawl. They are not used for prayers in the Jewish sense, but to let someone know that they are being prayed for.

Jesus wore a tallit with tzitzit, as any other Jewish man of the time would do. Notice it mentioned in this story –

Matthew 9:20-22 (HCSB)
20 Just then, a woman who had suffered from bleeding for 12 years approached from behind and touched the tassel on His robe, 21 for she said to herself, “If I can just touch His robe, I’ll be made well!” 22 But Jesus turned and saw her. “Have courage, daughter,” He said. “Your faith has made you well.” And the woman was made well from that moment.

Sometimes “the tassel on His robe” is translated as “the hem of his robe” but this is inaccurate. She is reaching for the tzitzit, the visible reminders of following God’s commandments. They are holy things, unlike the hem, which means nothing at all. Lest we get into idolatry, the tassels are not something to worship. They point towards God, and are a reminder to always serve God through doing good deeds.

They reached the other side and landed the boat at Gennesaret. People immediately recognized Jesus when he got out of the boat. They brought everyone who was sick to him, even carrying some on stretchers.

Whether he went into towns, villages, or the countryside, people brought the sick to him. They begged just to be able to touch the fringe of his robe. Everyone who touched it was healed.