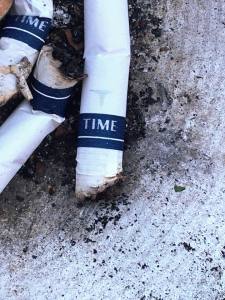 I found these cigarette butts in the canister outside the library. I’d not heard of them, but I found the name amusing and disturbing at the same time. Time is the one thing that cigarette smokers don’t have. They smoke it away. They are literally killing time when they smoke. Worse, they are killing time in multiple ways. At first, it means not doing anything meaningful with their lives during the fifteen minutes they take to smoke. It ends with years cut off their lifespan. In the middle, their quality of life is lessened (why am I using the passive tense – they lessen it themselves, it isn’t done to them) by the diseases they get – cancer, emphysema, heart disease, etc.

When I was growing up, cigarettes were known as “coffin nails” or “cancer sticks”. Perhaps something like that would be more honest. But this is pretty good.  Maybe it will make them think about what they are doing to themselves.

These are discount cigarettes, so they most certainly have more “filler” and less tobacco in them. Thus, they are even more dangerous to smoke. It seems logical that if someone wants to save money, they’d quit smoking altogether.

The sad part is that the poor suffer even more when they smoke because of the unnatural ingredients in their cigarettes. (Again, why am I using the passive voice? Smoking is a choice. Nobody forces you to smoke.)

I can’t make myself pray for people who have put themselves in a hole. They say “I need a miracle to help me get out of here”, and I say “What is the point?” You didn’t fall in. You climbed in, knowingly, for a decade.

It isn’t an accident that they have lung cancer or clogged arteries. Smoking cigarettes and eating poorly and refusing to exercise are choices. They chose to get sick, one bad decision at a time, over and over. So why pray for healing?

I know a guy who was slated to have heart surgery to clear up a blockage. They had to stop the procedure when they realized that the 30% blockage was really a 90% blockage. They’ll try again later. I’ve gotten emails and private messages asking me (and hundreds of others) to pray for him. The problem is, he weighs over 300 pounds. He put himself in this situation. Why pray? Why ask for divine intervention?

When my Mom got lung cancer after smoking two packs of cigarettes a day for 20 years, she was surprised. No amount of praying was going to undo that damage. No miracle was going to happen. When we came back from the doctor’s after finding out the diagnosis, she asked me if she could smoke. She’d thrown out her cigarettes when we were going to the doctors. She had an idea what was going to happen. The cigarettes were still in the house – but in the trash can. I told her that I would refuse to help her get better if she continued to smoke. Why waste my time?

There were plenty of people who would stand outside the cancer doctor’s office and smoke a cigarette before getting their treatment. What a waste. What stupidity.

I remember reading about how money is tight in England, and with the state-funded medical insurance program, they have to be very mindful about their resources. An overweight, elderly smoker who needs a heart transplant is likely to get passed over in favor of the younger person who doesn’t smoke. They take the time and money and spend it on someone who is likely to get some use out it. Why waste resources on someone who is going to waste it? I remember Americans being all up in arms about this. “Dignity of human life” and “How dare they” and “That isn’t fair” and all that, they said. Nonsense. Why put forth the effort when the person isn’t putting forth the effort?

Why pray for the person to be healed when they aren’t doing anything for themselves? Too late. The horse has already left the barn.

I really don’t feel I have the right words for this. I’ve thought about this for years, and I still don’t know exactly how to say it. I’m so frustrated with people waiting to the last minute and doing all the wrong things for their health and then being surprised that they have a chronic disease. Are we so blind as a nation, as human beings, that we think we can get by without paying the consequences? Are we so stupid that we think we should reap when we didn’t sow? Why do we think we are entitled to health when we refuse to create it? Good health isn’t an accident. Will power isn’t for the few. So many people are unwilling to work for their health, and then expect everybody else to feel sorry for them.

Maybe that is the problem. Passive lives all around. We don’t think about how we have to do things for ourselves. We blame others for our own failures. We blame our parents, our genes, our teachers for our own failures. We don’t have someone putting good food in front of us as adults – we have to provide it. Like children, we delight in treating ourselves with snacks and desserts. We pleasure ourselves every day with things that are bad for us, refusing to even try real food. We get a perverse pleasure out of not exercising, saying “you can’t tell me what to do.” We are children, not adults. We are killing ourselves with our childish behavior too.

No prayers. No miracles. We can’t wait for a savior. We have to save ourselves.

Smoking represents an inability to speak your truth. When you smoke, you are literally burning the back of your throat. You are also making it impossible to speak because your mouth is closed.

It is difficult to speak up for yourself. There’s a lot of anxiety and tension that comes from it. But just like with smoking you feel pain at first and then it feels better. When you smoke, the nicotine gets into your blood system and you start to feel more relaxed. But you don’t feel relaxed right off at first. The smoke tastes bad and the burning in the back of your throat is unpleasant. But eventually you start to feel calmer. The same is true with speaking your truth.

When I quit smoking pot, that very morning a patron verbally attacked me. It was a real test of whether I had really grown up and decided to quit. It was a very vicious verbal attack and I was emotionally scarred. I went in the break room and I sat down and cried for a little bit. And I prayed as well.

I said “God, if you really want me to quit then why would you test me by giving me this evil woman who says that she “is a Christian and she treats people in a Christian way’?” Of all the ways I could have been attacked, that was the most difficult – for a “Christian” to yell at me because she broke the rules and I had to call her on it.

I briefly considered going back to smoking and then I realized if I did then I was letting her win. At the time I was smoking not only pot but clove cigarettes to escape my feelings. I realized that I could not continue smoking pot because I wanted to buy a house. There was way too much paperwork and too much preparing to do to be stoned.

In the past, every time someone would upset me I would look forward to having a smoke. Every time I would smoke I would forget how much they upset me. But the problem was that I was polluting my lungs and fogging my mind. I wasn’t harming them at all. I wasn’t getting back at them. I was harming myself. It became important to me to stand strong.

Here’s the crazy part. Smoking is what causes the stress. Or, better said, smoking is just putting off dealing with the stress.

We all have stress. Smoking just delays it, and then the problems multiply. Smoking doesn’t make them go away. Then, you have the worry over the fact that you are smoking to add to it. And your lungs don’t work as well, so that it stressful.

Smoking becomes the reason for your stress. It is a stupid cycle but it’s a very human one. We all do it.

You have to learn how to take care of yourself when times are hard. You can’t wait until life gets easy.

The time to
learn how to fly
is when
you’ve been kicked
out of the nest,
not when you’re safe in it.

It is absolutely insane that our human bodies are designed to crave all the wrong things when we are under stress. The things we desire – extra salt, extra fat, extra sugar – are all things that make us feel worse in the long run. These things keep us drowning.

Rather than
dragging us
to the shore
they drag us
under.

When we are under stress, we are said to have a fight or flight reflex. All our lizard brain wants to do is run away. And certainly run away is a great answer to pain. Who wants to be in the middle of pain? But running away sometimes only causes more pain. Often we run away with drugs, alcohol, smoking, and food.

Interestingly, the stuff that we humans take into ourselves that harms us was made by humans. It isn’t natural. We crave caffeine and processed sugar and excess fat. We crave things that come in packages and have labels. The more we go for healthy things the healthier we are not only physically but mentally.

Ideally people would never ever experience processed food. The moment a child eats a candy bar instead of an apple all he is going to want is the candy bar. And because it makes him happy and excited that’s going to be what he reaches for when he is under stress.