I left a church when the minister thought I was crazy for praying to God and hearing a reply. The more I thought about it, the more I realized that in the three years I’d been a member there, not a single person had talked about hearing from God – including her. God and Jesus were past tense and future tense – not present tense. They weren’t right now. You’d think getting people to feel comfortable talking with God would be the goal of church, but often it isn’t. Often the goal is mute submission to authority.

I remember that even Jesus’ family thought he was crazy, and the religious authorities decided that he was possessed.

(This is from The Condensed Gospel)
When the Pharisees heard about this they said “This man drives out demons with Beelzebub.” Some, to test him, were demanding to see him perform a miracle. Even his own family thought he was crazy.
Jesus knew their thoughts and said “A divided kingdom cannot stand. No one can enter a strong man’s house and steal his possessions unless he first ties up the strong man. Thus, if the king of demons drives out demons he is fighting against himself. How can his kingdom stand then? If I drive out demons by the king of demons who is it that your own people drive them out by? Accuse them of the same thing you accuse me of! Now, if I drive out demons by the Spirit of God, then this is proof that the kingdom of God has arrived among you. People will be forgiven for whatever they do and whatever they say unless they speak against the Holy Spirit. That is unforgivable. Anyone who is not with me is against me, and scatters rather than gathers.” He said this because they were saying he had an evil spirit in him.
MT 9:32-34, MT 12:22-32, MK 3:20-30, LK 11:14-23, LK 12:10

In John 7:5 we learn that even Jesus’ own brothers didn’t believe in him. They lived with him and knew him well, and they thought he was a crackpot.

If this is how Jesus was treated by his own family, it stands to reason that his followers would be treated likewise, but it is sad that it happens in the church. He even warned his disciples that they would be accused of everything he was, and suffer his fate – but he meant that it was going to come from the religious authorities that they were trying to usurp, not from within the faithful.

“Crazy” is the modern way to silence someone, especially a woman. It is said to discredit or diminish her impact on others. It is used these days in the same way that the accusation of witchcraft was in years past.

If you have been told you are crazy by a church member or minister, leave right away and find people who hear the same voice you hear. You aren’t crazy. The ones you left are, because they can’t hear the One who they say they follow. How can you follow God if you don’t even know God’s voice? 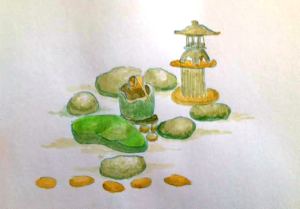 The Tea garden
isn’t a garden
but a path.
It is how you get to the
Tea house
for the
Tea ceremony.

Why not have the Tea room closer?
Why a garden?
Why a path?

Because you aren’t ready.
You need that time,
that space,
to take off your
everyday self
and to welcome
the stillness
and attention
that is the Tea ceremony.

You need that compressed walk
to the hermit’s hut
at the base of the mountain.
You need to pass through gates
real and hinted at.
You need to sit
on a low bench, sheltered with bamboo
long enough to shake off
the dust of the outside.

Why not have that experience all the time?
Why not be that cleansed,
that alert
that awake
always ready to welcome
everything
as a message
from God, the Creator, the Infinite?

Are there jobs that pay for
that kind of bliss?
Are there relatives who won’t
call the authorities,
worried you are out of your mind
when in reality
you are the only sane one?

By giving up your Self
and merging with
the All
you have truly
Remembered.

I’ve come across several people recently who say they have something important to say. They want people to read their books or have them speak at events. The only issue is their books look like manifestos and their speeches sound like rants.

One guy writes conspiracy theory tracts. He self published a book, then cut it down to a booklet because people said it was too long to read, then kept cutting it down until now it is all on one sheet of paper, front and back, small print. I think they said it was too long to be kind. They didn’t want to read it at all. He uses a lot of capitals and bold face and italics. Visually his handouts are a mess. Even this short, it is too much.

Another guy is equally paranoid. He wants to grow everything himself because he thinks the government and then the economy is going to collapse. While it is good to be self sufficient, his level of paranoia is palpable. He talks fast and doesn’t listen to the other person’s opinions. He thinks they are deluded. He thinks he is the only person who knows what is really going on.

Another guy is trying to get himself invited as a “controversial speaker” to a local religious group meeting. He has stated that you can’t declare yourself a prophet, but then he say he is one and he is the only one talking. His “introduction” took up the whole page of the group’s homepage.

They sound crazy. They may have something important to say. Truth very well might be revealed to them. But how they are presenting it makes their message questionable.

But then I think maybe it is for the best to not tell them.

If you put a new coat of paint on an old car, it will still run the same. If you try to sell this new looking car to someone they are going to be fooled. They will get in and drive down the road a bit and end up stranded.

I don’t want to do that to the passenger. It is important to not mislead people. Even if I’m not delivering the message, I will have aided and abetted. If I help someone repackage their message so that other people finally listen to it, I’m responsible for the fallout.

Maybe their message is crazy. Maybe that is why they seem messed up.

It is really fascinating to see different people’s reactions to when they hear why I don’t go to my old church any more. Every now and then members of that church come into the library where I work. Sometimes they ask why they don’t see me anymore. Sometimes they don’t ask and I tell them anyway.

I’ve pared down the story to what is essentially an elevator speech. It is short and to the point. I explain how the church experience that we are being served doesn’t match up with the Church that Jesus came to create. That it isn’t about us giving all of our tithe money to support a building but the Body of Christ. And that Body isn’t just the church members but everybody. I point out that Jesus didn’t tell us to have ministers or a division of lay and ordained.

It is interesting to note the reactions. Some people start to turn away from me, to actually try to leave. I think they feel threatened by my ideas. An alarm clock is certainly threatening to people who are asleep.

I would have had the same reaction to anyone saying what I’m saying about five years ago. How dare you attack my church?

But now I think about what church is, really. Who are we serving? Who are we following?

One person I talked to said that the church is being run like a business. He said that the former priest did the same thing. And yet he still goes. He said his wife refuses to go to that particular church because of the priest who is there. I’ve met others with the same sentiment.

But it isn’t the minister. It is the whole idea. We are doing it wrong.

The minister is being duped too. She’s bought into the system. She has the most to lose, so her ego is tied to it.

They haven’t yet realized like I have that the problem is bigger than that minister or that parish.

We have to strip the whole thing down and start all over again. We can’t fix it from the inside. I tried that. I was viewed as crazy. I still am by many of those who still go to that church. Declaring someone as crazy is the fastest way to discredit someone, after all. It is the fastest way to silence someone.

I’ve not gone silent. I’ve just gone away. And in leaving I’ve found a large community of people who are just the same as me. They love Jesus, but they weren’t finding him in the church. We can’t all be crazy. Perhaps there is something more going on. Perhaps we are the only sane ones. Perhaps it is just like with “The Emperor’s New Clothes” – perhaps we are the only ones who are seeing things the way they really are.