The University of the South, also known as Sewanee, is found on Monteagle Mountain, in Tennessee. It is glorious. It is beautiful. It is a regular university with regular classes, and it also is a university that trains Episcopal priests to be Episcopal priests. Walking on the campus makes me think that I’ve been transplanted to England, three hundred years ago.

There is a lot to this campus, and it is fun to prowl around it. There are many fun nooks and crannies, and most of the buildings are open for the casual wanderer. I’ve taken many pictures there over the years, but here what I’m going to share with you are some examples of doors from Sewanee.

I don’t think they know how to make normal sized doors here. This was found on the second floor of a building that has rooftop access. It is outside of a classroom. Perhaps it fits the fire code’s requirement to have two ways out of a room. Perhaps it is a joke. I’m not very wide anymore, and I think that even I would have to turn sideways to use this door.

This is a tiny bathroom. It is just big enough for one, barely. I think the door looks a bit like the TARDIS.

Here’s a classic door from Sewanee. Lots of stone and wood and iron fittings.

Here’s a detail shot of it.

This was on the door for the “Center for Religion and Environment.” In order to find this office you have to find the bell tower. And then you have to go up about five flights of steps. Maybe more. Only fit people can come up here. The room for the bell is just opposite this door. It was lovely to listen to the hiss and wheeze of the pneumatic valves that work the mechanism. It was a little overwhelming to listen to the bell ring that closely, however.

Here’s a tiny door underneath a flight of stairs. At the top of the stairs is the observatory. I have a fascination with tiny doors. I don’t know if I love tiny doors because of Alice in Wonderland, or the other way around. 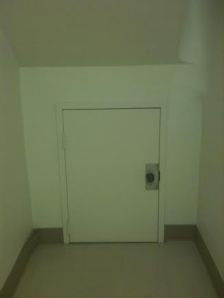 And last, but not least, are some doors for professor’s offices. Perhaps the doors are adjusted to the height of the professor, in the same way that Frank Lloyd Wright adjusted the homes and the furniture he designed for the size of the client? Or perhaps they got a discount on mis-matched doors? 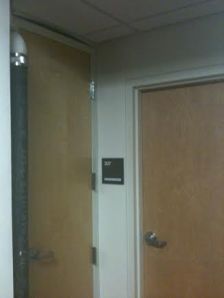 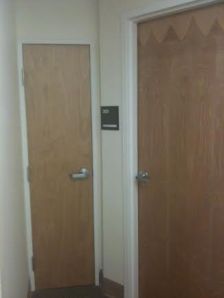 This is outside another office. The door is normal sized, but I really like the tiny clipboards so people can leave him notes.

Sure, I didn’t take any pictures of the usual doors you’d expect to see there. Anybody can take those pictures. I wanted to share with you some doors that the usual person wouldn’t see.

I leave you with these words from Jesus in Matthew 7:13 “Enter through the narrow gate. For wide is the gate and broad is the road that leads to destruction, and many enter through it.”

At the beginning of some yoga classes the teacher will invite you to set an intention. This is a prayer, or a hope, or a goal. It is a focus point. It is a way of aiming yourself in the right direction.

I offer you this insight from “Alice’s Adventures in Wonderland”

So you need to set an intention, otherwise you’ll end up just anywhere. You’ll wander off aimlessly and end up years later wondering how you got there. You got there because you drifted along with the stream.

Sometimes it isn’t planning to fail, but failing to plan that is the problem.

This is true mentally and physically. Where do you want to go? Do you have a business plan? Do you have a career plan? Do you have a spiritual plan? This isn’t about the “name it and claim it” trend – it is about being awake and intentional about life. I don’t believe in “wish-craft”. I do believe that everything worth having in life is made up of little tiny steps. You have to have a plan, and you have to work towards that.

Neil Gaiman in his “Make Good Art” book said that when he first started out he envisioned where he wanted to be as a mountain. He’d look at whatever job was offered him and measure it up as to whether it moved him closer to the mountain or further away. This seems like a good idea. Does this little thing get me closer to where I want to be?

Life is cumulative. A college degree is made up of many classes and many tests. It didn’t happen overnight. It took a lot of little steps, going towards a goal. Everything built on top of everything. If you took a class and read a book and attended a lecture on your own with no goal in mind, you might learn something but it wouldn’t add up to anything specific. You will have frittered away your time, aimlessly wandering. You’d end up nowhere, lost.

This reminds me of when I was on a trip in England with my aunt. She was driving and I was navigating. I’d give directions as to what leg of the roundabout to take and she’d sometimes pay attention. She’d take the third leg instead of the fourth and we’d be hurtling down, getting further and further away from where we wanted to be. English roundabouts aren’t like American interstates. If you get off on the wrong one you can’t turn around and right yourself anytime soon. You’ll be at least thirty minutes away down the wrong road before you get to another roundabout where you can reorient yourself. She could have stayed in the roundabout, going around again to aim at the correct leg, but she didn’t. This happened a lot.

After several days of this I relinquished my role as navigatrix. Why bother telling her where to go when she was going to ignore me anyway?

So, my point is to aim. Plan ahead. Have some idea of where you want to go, because either you’ll stay stuck where you are, or you’ll end up really far away from your goal. What do you want to be doing ten years from now? How are you going to get there? Sometimes it takes baby steps in that direction. Just keep aiming that way, keep walking.

And don’t get in a car with my aunt.