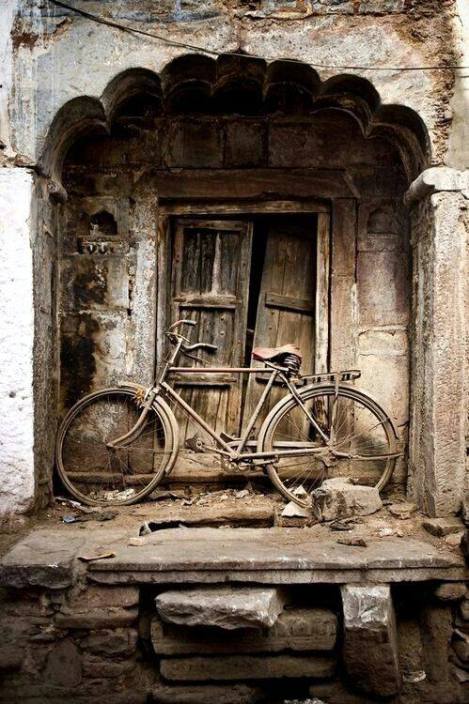 Fouad rode his bicycle to the souk every day, except Friday, of course. Then, if he had to, he walked, carrying just the essentials of his trade. All week long he sold gold jewelry that he had made, but on Fridays he only did repairs, and then only by appointment. Otherwise he was at the mosque along with most of the town. Sure, there were some who went early in the morning and were done for the day, but not Fouad. He spent all day there.

He wasn’t especially virtuous. He just liked being there, seeing the men in their best djellebas, hearing the drone of the chanted prayers. He’d be there every day, all day long if he could, but the only way to do that would be to get paid by the mosque, and this mosque didn’t pay anybody. The imam wasn’t paid in this town and he wasn’t even a particularly noted scholar. It was whoever the congregation decided upon for the month. It was always a man who was learned, for sure, and respected, as well as someone who was comfortable leading the congregation in the prayers.

They all knew the words and the postures, sure, but it was important to have someone set the pace. A prayer service was a lot like a musical performance. Every musician knows his part, but still needs a rhythm, a framework to rely upon for it all to work together. For a band, that was the drummer. For a mosque, that was the imam. The imam set the pace, and his demeanor determined the outcome. Some were nervous and went too fast, others were more hesitant and self-conscious and waited too long between the prescribed movements. The mark of a leader was to be decisive, even if the decision was sometimes wrong. You could always fix it later but you had to have something to work with. Fear of making any decision at all was death.

Fouad had no worries about ever being picked as the imam. He was liked but nobody ever would mistake him for a leader. He could barely keep his own house together. It looked held together with twine and hopes. Everybody knew that leaders had something extra. They had more than enough. People who were just barely getting by weren’t leaders.

And then one day this all changed. It had been raining for a week by that point, and the roads were all but impassable with a thick mud that grabbed at the ankles. Most of the townspeople stayed home the whole week. Either the mud was too much to negotiate with or they were bailing water out of their homes. Friday found only three people at the mosque – Fouad, and two old men who lived just two houses away. The men went to the services there every day to get out from under their wives. They learned early on in their marriages that it was best to give a wife time to herself every day or the household didn’t work as smoothly as you might hope. The mosque was a safe place to retreat to.

The two men were so old that they could barely speak above a whisper, and they couldn’t even remember the order of the Salat if asked to recite it. They had performed the ritual movements so often that their bodies remembered them more than their minds. They both chose Fouad to be the imam for the day, and he agreed only because it would be rude to refuse the request of your elders.

His performance was flawless. Every bow, every recitation, every note was impeccable. He enacted the role as if he was born to it. The two old men could hardly believe it. This was Fouad? Fouad the goldsmith who never said a word unless absolutely necessary? He was an untapped treasure! He wasn’t a diamond in the rough – he was already cut and polished, ready to be shown to those with the most discriminating tastes. And here! In their little town! It would never be the same.

And it wasn’t. After much explaining to the rest of the congregation once they returned, it was decided that they had to ask him to be the imam for a week as a trial. They had just as difficult a time believing it was true as the two old men – and they had heard for themselves! A week would be plenty of time to discern the truth of things. Maybe the old men were mistaken? Maybe it was a fluke? But they had to know.

It took a lot longer to convince Fouad. He was quite shy by nature, and very modest. This is part of why he was a goldsmith. Per Islamic law, he was only allowed to charge by the weight of the gold and not his artistry. He never had to worry about overinflating his prices because of the time and effort involved, or of underselling out of modesty. Charging by the gold’s weight meant he was just a middleman, getting to play with the magical metal in the meantime. Imagine if the Western art world did this with paintings. A paint-spattered piece like a Jackson Pollock would cost the same as a Rembrandt, purely based on the amount of the paint and canvas used.

Another reason Fouad was hesitant was that he’d have to take a week off from selling his wares at the souk. He had no other source of income, but he’d saved his dirhams over the years. Yes. He could take a week off. It would be good practice to not worry about money for a while. He was serving Allah, after all, so who was he to worry about money? If he was following a true call, the money would sort itself out.

The elders of the community were skeptical until they saw it for themselves. Even then, they were sure there couldn’t be a repeat performance. Every day for a week they were surprised. They decided that they must make a way for this hidden treasure to be their imam for as long as possible. Even though they’d never paid an imam before, they knew they’d have to do something different now in order to keep him.

There wasn’t enough money to have an actual salary. Fortunately Fouad was a man of simple needs. They selected a corner storeroom inside the mosque to be his new home, and every day grateful members of the congregation brought him his meals. And as for his bicycle? He no longer needed it, so he rode it to his old ramshackle home and left it on the front stoop for anyone to borrow. That walk to the mosque was the last one he’d ever have to do from that direction, so he savored the sights along the way.

(This story came about because my friend Doug S. posted this picture on his Facebook page.  Another friend commented “That’s strangely beautiful” to which he replied “Yeah, it’s kind of like a picture of a story that you haven’t been told yet.”  I commented “Maybe I can help with that…”  And so I did.  I asked him to give it a name without seeing the story I’d written.  It was a good name, but I had to adjust the end of the story a little to make it fit. Copyright belongs to the photographer.)