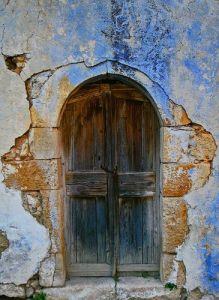 The door was locked. I expected nothing less. Every day for three months I’d tested this door, every day since I’d first noticed it. Why hadn’t I stepped down this alleyway before? What was it about that Tuesday in July that made me take a different path? My walk to the university had been boring, predictable even, up until that day.

A new path, once taken, changed the path-taker forever.

A part of me wanted to drink in every nook and cranny, every crease and crevice. I wanted it to stay new, stay fresh. I was wary of this new path becoming worn like my old one, so familiar and comfortable that I didn’t even see it anymore. I was wary of it becoming just a way to get somewhere, instead of a destination in and of itself.

But this door was different. I’d tested it unthinkingly that first afternoon because of the aromas wafting through the gaps created by a century of settling. I was certain it must be the gateway to the side courtyard of a restaurant. Only when the portal did not budge did I take the time to look for a sign on the wall. Finding none, I halted. If this was a home and not a restaurant, I should not persist.

The next day I chose to walk down that alleyway again, noticing even more than I had the day before. How much I had missed! Yet again I was drawn to this door. This time I could hear a child’s laughter and the sounds of a fountain. What treasures lay behind this ancient door? What Paradise was hidden just beyond these walls? To imagine that just a few inches of stone and stucco separated me from this treasure! A hand’s breadth away from the dirt and grime of this forgotten alley-street was another world. I would have to check this door every day from now on until it yielded to me.

(The image is from Pinterest – copyright belongs to the photographer.)