I went on a wander recently, inspired by the book “The Wander Society” by Keri Smith. She is the author of interactive books that inspire creative thinking – such as “Wreck This Book” and “The Pocket Scavenger”.  They aren’t books so much as ideas and suggestions to make you see the world differently.  Normally you do something to the pages with her books – glue something in, paint something, staple, sew, chew, freeze…   But this book is different.  You are the one who gets altered.  You are encouraged to go on aimless wanders, inspired by Walt Whitman, and really experience the world, directly, without using your phone at all.  Actually see, smell, hear, taste, feel what is around you – interact with the real world, as it is, and as you are.

She says that if you send a picture of a small cairn (a pile of stones) that you made to info@thewandersociety.com, you’ll get a Wander Society membership card.

I could have cheated and made one in my back yard, but I’d know.

I went to my dentist’s office recently and got there a little early. I happened to park in an area that I don’t normally.  There is a Midas Muffler shop next to the office, and from where I was parked I could see they had a tiny back yard.

Here is a view of it from Google Maps – the yard is in the bottom right. His office is at the top.

I wandered out of the parking lot for the dentist and into their yard. I didn’t look to see if anybody was watching me.  Most people are so involved in their own concerns (and their phones) that they don’t notice someone stepping off the pavement and into some other area.  Also, if you act like you are doing something wrong, people will think you are doing something wrong.  So don’t act like it.

I wandered partly into the yard to look at it. It was a small area – big enough for a picnic, but not for a game of soccer. I didn’t go all the way in.  I saw some stones (probably chips from the concrete) near the patio area.  I went closer to look at them and realized that the door to the shop was open.  There was a possibility that they could see me.  I had to be careful. I stacked the chips to make my cairn.

I stood out of view of the door when I took this picture.  I wanted to minimize my chance of getting caught.  It wasn’t like they had “no trespassing” signs up – and I wasn’t damaging anything.  I stacked some stones.  Hardly vandalism.  But I still didn’t feel like explaining what I was doing. 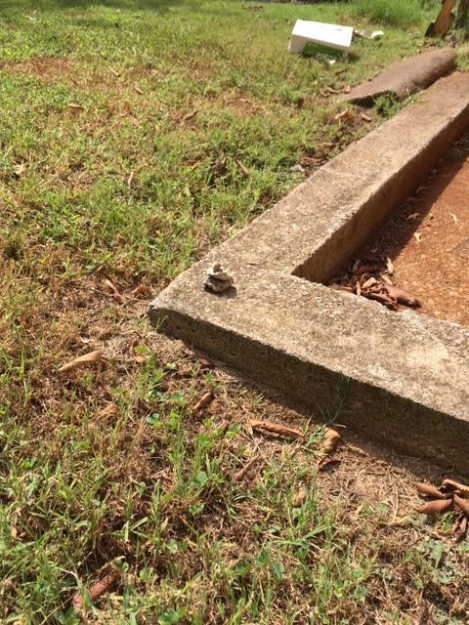 I used the camera’s magnification to take this closer shot.  This is what I sent to them  but I’ve not heard back from them.  (Or her, because is this really a thing – or is it just her idea and she wants to be a thing?)

Do you need a membership card to be a wanderer?

When part of the questionnaire for the society says that “Would you be willing to give up technology on a temporary basis from time to time?” and has questions asking if you agree or disagree with these statements – “Modern society has created a situation where life is experienced second hand, through screens instead of through direct experience.”  and  “It is time for us to take control of our mental environment.”  – then maybe I’ve failed as a wanderer by trying to get confirmation of my membership using the very technology they are trying to get us to move away from.

Don’t do like I did and just look at the lightning-bolt symbol and think that’s it.  Scroll down and click on the other symbols.  Print out the various things – one of which is the membership card.