There weren’t many bead stores when I first started making jewelry over twenty years ago. I hadn’t even thought about making my own jewelry until I met someone who did. She took me to a bead store in DuPont circle in Washington DC, near where I was living at the time. When I moved back home to Chattanooga there weren’t many options to get supplies for my new hobby.
There was one bead store, way out in the middle of nowhere, thirty minutes away from my house. It was a rarity for that time. That lady was forward thinking. It was called Fat Jane’s beads, and while the owner was named Jane, she wasn’t fat. It was a joke from when she was pregnant. Her store stocked a lot of beads, but they were all in containers and all the containers were in display cabinets. It was a long drive to get there, and a lot of work to find the beads I wanted while there.
I prefer to look for beads unmolested. I like to study each strand for as long as I want to pick out the exact shade and variety I require without having a shopkeeper stare at me. I also don’t want to have to ask for each box to be pulled out of the cabinet. It is as if she didn’t want to sell the beads at all. Beads were the main focus of the store, not a sideline, but it didn’t feel like that at times.
Another place that sold beads was called the New Moon Gallery. They didn’t have many beads, but at least they left me alone to study them. Beads were not their main source of income. They sold books and clothing and music and jewelry to the New Age crowd. I even sold jewelry to them for a while.
The best place to buy beads was Goodwill. I bought necklaces and tore them apart carefully to learn how to make my own. There weren’t books or classes about how to make jewelry then. I figured it out in my own. Goodwill was the best for beads. Not really for selection, but for price. I could buy a necklace for a quarter and redesign it into a triple stranded bracelet and sell it for $15. Cheap price, huge profit. The ladies at the one I frequented knew me and saved off the good stuff just for me so I’d have first dibs.
Too bad people don’t understand how much beads cost these days. They aren’t cheap at all. Goodwill sells all the really good stuff online now. Plastic junk is all you’ll find when you go into the store. Bead stores are more plentiful, but the prices are much higher. At the price per amount of space in the bag, beads cost way more than I remember pot ever costing.
Back when I first started making jewelry, the two went hand in hand. I’d smoke a bit and bead a bit. Creativity flowed. Now I’m sober, I don’t create with beads near as often. I’m just as likely to write or paint or draw now. But I still like creating jewelry and I still like selling it, but the prices have had to go up because the cost of the beads has gone up.
I can certainly make everything cost $20 or less but it will be watered down. There will be lots of cheap glass filler beads. There will be very little design. Boring. Bland. Blah. People have to understand that they get what they pay for.
Who am I kidding? This is a society that eats food with artificial colors and flavors and chock full of preservatives. They don’t like homemade, organic, good for you. They don’t appreciate individual, artisan work. They don’t get one of a kind. It appears I have two choices – I could lower my standards or just expect people to raise theirs.

1 pound scallops, washed.
a knob of butter (about half an inch thick)
2 tablespoons dried basil
I heaping tablespoon mild goat cheese.
Half a tablespoon salt 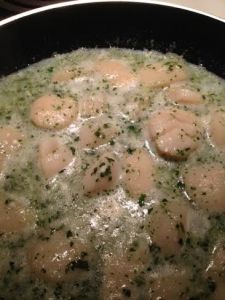 Put a knob of butter in a large sauté pan over low heat. When the butter is melted, add the scallops.

Cook gently until the scallops have released some of their liquid. Then add the salt, basil, and goat cheese. Stir, distributing the cheese equally. Turn the scallops over to cook the other side once the bottom side has gone from translucent to opaque.

Scallops are done when they turn opaque. Do not overcook – they will be tough.

I served this with quinoa and steamed vegetables. I served it the next day as leftovers, mixing it all together with the liquid the scallops cooked in and it was even better. 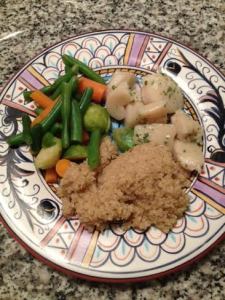